From NASA: In this rare image taken on July 19, 2013, the wide-angle camera on NASA’s Cassini spacecraft has captured Saturn’s rings and our planet Earth and its moon in the same frame. It is only one footprint in a mosaic of 33 footprints covering the entire Saturn ring system (including Saturn itself).  At each footprint, images were taken in different spectral filters for a total of 323 images: some were taken for scientific purposes and some to produce a natural color mosaic.  This is the only wide-angle footprint that has the Earth-moon system in it.

The dark side of Saturn, its bright limb, the main rings, the F ring, and the G and E rings are clearly seen; the limb of Saturn and the F ring are overexposed. The “breaks” in the brightness of Saturn’s limb are due to the shadows of the rings on the globe of Saturn, preventing sunlight from shining through the atmosphere in those regions.  The E and G rings have been brightened for better visibility.

Earth, which is 898 million miles (1.44 billion kilometers) away in this image, appears as a blue dot at center right; the moon can be seen as a fainter protrusion off its right side. An arrow indicates their location in the annotated version. (The two are clearly seen as separate objects in the accompanying narrow angle frame: PIA14949.) The other bright dots nearby are stars.

This is only the third time ever that Earth has been imaged from the outer solar system. The acquisition of this image, along with the accompanying composite narrow- and wide-angle image of Earth and the moon and the full mosaic from which both are taken, marked the first time that inhabitants of Earth knew in advance that their planet was being imaged. That opportunity allowed people around the world to join together in social events to celebrate the occasion.

This view looks toward the unilluminated side of the rings from about 20 degrees below the ring plane.

Images taken using red, green and blue spectral filters were combined to create this natural color view. The images were obtained with the Cassini spacecraft wide-angle camera on July 19, 2013 at a distance of approximately 753,000 miles (1.212 million kilometers) from Saturn, and approximately 898.414 million miles (1.445858 billion kilometers) from Earth. Image scale on Saturn is 43 miles (69 kilometers) per pixel; image scale on the Earth is 53,820 miles (86,620 kilometers) per pixel.  The illuminated areas of neither Earth nor the Moon are resolved here. Consequently, the size of each “dot” is the same size that a point of light of comparable brightness would have in the wide-angle camera.

The Cassini-Huygens mission is a cooperative project of NASA, the European Space Agency and the Italian Space Agency. The Jet Propulsion Laboratory, a division of the California Institute of Technology in Pasadena, manages the mission for NASA’s Science Mission Directorate, Washington, D.C. The Cassini orbiter and its two onboard cameras were designed, developed and assembled at JPL. The imaging operations center is based at the Space Science Institute in Boulder, Colo.

For more information about the Cassini-Huygens mission visit http://www.nasa.gov/cassini and http://saturn.jpl.nasa.gov.

Reminds me of the Chesley Bonestell paintings of my younger days:
http://www.zenker.se/Books/saturn_from_mimas.jpg

That outer ring sure looks warmer than usual – Can I get a grant and be on the warmist payroll for that – Just saying.

Earth and all its trillions of of people are seen as a spec of light — center right — in the vastness of space.

All on a planet with a core temperature of millions of degrees, no doubt.

I want that view from my living room.
Time to toss out the environmental doom mongers, and get on with some technological advance.

I think such pictures are rare because it is dangerous to point Cassini’s cameras anywhere near the direction of the sun, and from Saturn the Earth is always roughly in that direction. In this case Saturn itself was eclipsing the sun, and so the photo could be taken.

Why can’t we see the moons of Jupiter with the naked eye if we can get a picture of earth and its moon at such a distance. Also, this photo puts into perspective how likely we are to be able to spot a planet that has even a miniscule probability of having life.

Thanks, Anthony. Good article, fantastic picture, nice little planet Earth.
Gary, binoculars with 7X power and 50 mm of aperture, if of very good quality and steadily supported, not hand-held, do let you see the 4 Galilean Moons in good “seeing” conditions, at night.

I photoshopped the arrow out of there. Is the arrow really necessary?

I annotated the image to highlight recent improvements in cosmology: 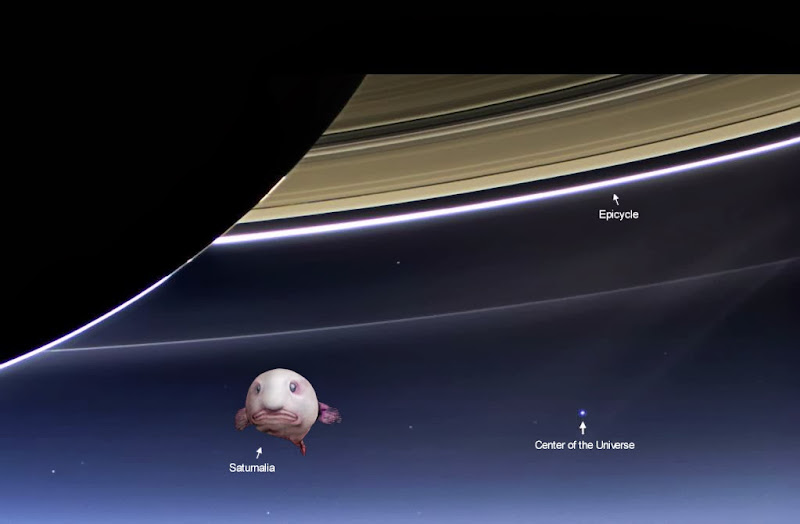 So many photons, so little time.

Gary Pearse says:
“Why can’t we see the moons of Jupiter with the naked eye”
People with good visual acuity actually can see them. With a binocular it’s easy.

J. Philip Peterson says:
July 22, 2013 at 8:55 pm
I photoshopped the arrow out of there. Is the arrow really necessary?
As fans of The Hitchhikers Guide to the Galaxy will tell you, what had already been photoshopped out is a sign saying “You Are Here”. Face it, guys, this is a publicity shot for The Total Perspective Vortex.

Which dot is our moon? – two arrows seem to be needed, but then indeed also an image offered without any arrow.

Well that made me clean my computer screen.

Thanks a great photo.

The Earth + Moon portion of the photo was the “Astronomy Picture Of The Day” ( aka APOD ) for July 22.
Here is the one originally shown ( APOD has changed to another since ). This is the nice, unprocessed one that is described by NASA as: “Quickly released unprocessed images were released Saturday showing several streaks that are not stars but rather cosmic rays that struck the digital camera while it was taking the image.”. That must be why they changed it, but I like it better than the later one …
http://saturn.jpl.nasa.gov/multimedia/images/raw/casJPGFullS79/N00213963.jpg
This one is currently the APOD …
http://129.164.179.22/apod/image/1307/earthmoon2_cassini_946.jpg
The separate images are in a slideshow here …
http://www.flickr.com/photos/lightsinthedark/9329557951/in/photostream/

Gary Pearse says:
July 22, 2013 at 7:37 pm
Why can’t we see the moons of Jupiter with the naked eye if we can get a picture of earth and its moon at such a distance.
The Earth being closer to the Sun should reflect a bit more light then Jupiter’s moons do…
Btw, very nice picture, thanks for posting it, it is good to see things put into perspective from time to time…

Thanks for posting this stunning image, which is not only a visual delight but also a good lesson in scale and celestial mechanics.

May I say, in a thoroughly unoriginal but heartfelt way, “WOW!”

I think I can see my house! (Wish I’d mowed the lawn…)

There is a saying, “All that glitters is not gold.”
All that shines is not cloud tops and water either.

Reblogged this on Public Secrets and commented:
This is just way cool. *Sigh* We should have been to Saturn on a manned mission by now.

Gary Pearse says (July 22, 2013 at 7:37 pm): “Why can’t we see the moons of Jupiter with the naked eye if we can get a picture of earth and its moon at such a distance.”
Since this is a photograph of unknown exposure time, it’s hard to compare with the naked eye. On a whim, I decided to calculate the relative brightnesses of the Earth and Moon at Saturn’s orbit vs. brightness of Ganymede, Jupiter’s largest moon, at Earth’s orbit.
My starting data, taken from various web sites:
Earth: distance to sun 1 AU, radius 1 Earth, albedo 0.367
Moon: distance to sun 1 AU, radius 0.27 Earth, albedo 0.12
Ganymede: distance to sun 5.2 AU, radius 0.41 Earth, albedo 0.43
Saturn: distance to sun 9.5 AU
As to planetary alignments, I assumed Earth-Moon in a straight line with Ganymede and the sun, and on the same side. Ganymede would then appear as a full disk to Earth observers at a distance of 4.2 AU. I assumed Earth-Moon, sun, and Saturn formed a right triangle, with Earth-Moon 9.55 AU from Saturn. Both Earth and Moon would appear as (roughly) half disks to observers at Saturn.
Long story short, I calculated that Ganymede’s full disk brightness at the top of Earth’s atmosphere would be about 1/13 that of 1/2 disk Earth at Saturn’s orbit, and about 3 times that of 1/2 disk Moon.
Hope I didn’t miscalculate. 🙂

Khwarizmi says:
July 22, 2013 at 9:12 pm
I annotated the image to highlight recent improvements in cosmology:

You forgot the Teleconnections.

Why can’t we see the moons of Jupiter with the naked eye …
Glare, mainly. The moons are no more than about 2 arc minutes away from Jupiter, at about magnitude +5, while Jupiter is magnitude -1.5 or so. Try splitting Epsilon Lyrae into two components with your naked eye. They are separated by about 3 arc minutes and are about 5th magnitude. Imagine if one of them was mag -1.5 how it would overwhelm the other star. If you have excellent vision, try placing Jupiter behind a power line or other wire to block its light, and you might be able to make out a moon or two. My vision is 20/20 or better (corrected), and I have not been able to see the moons.

If this photo was the only piece of data the cassini mission sent back to earth, I would still say it was worth it.

Anthony.
This photo would make a great temporary header, in place of the graphic you now have in place.

Lunar Soil has the Potential to Generate Oxygen and Fuel