Radiation from the flare ionized the top of Earth’s atmosphere, causing a shortwave radio blackout over the Americas. Here is a blackout map. Aviators, mariners, and ham radio operators may have noticed unusual propagation effects at frequencies below 30 MHz.

A CME is almost certainly emerging from the blast site. SOHO coronagraphs have not yet detected the cloud, but there is strong circumstantial evidence. For instance, the US Air Force has detected a Type II solar radio burst, a type of natural radio signal generated by CME shock waves. Also, NASA’s Solar Dynamics Observatory has imaged a solar tsunami apparently generated by a CME leaving the sun’s atmosphere.

Stay tuned for updates on what this power event means for Earth. 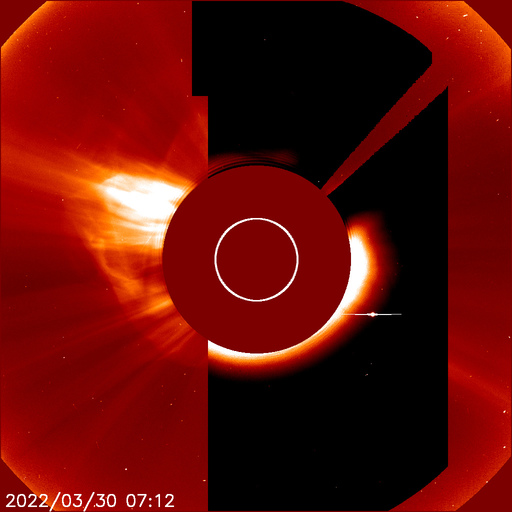 Visible planet is most likely Mercury but could be Vinus, someone might double check.

The other SOHO camera was practically blinded for few moments 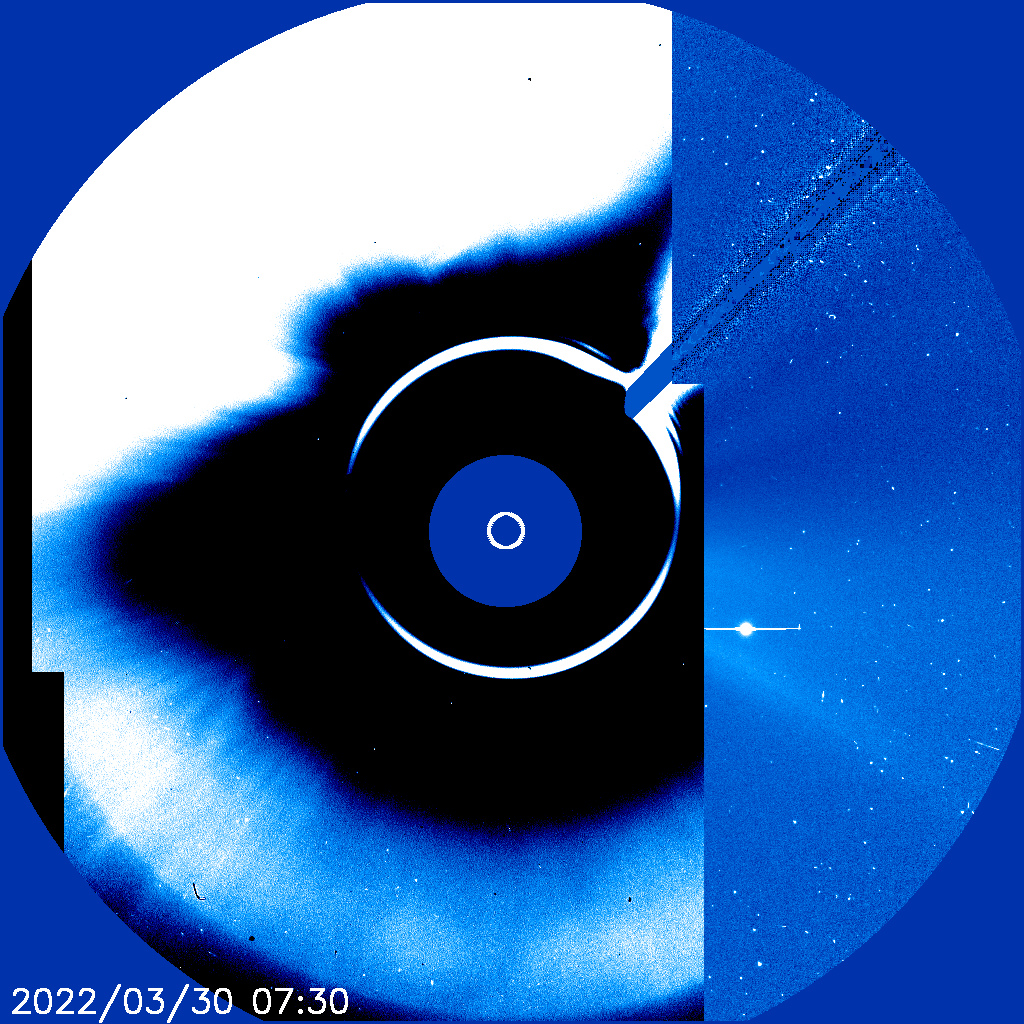 Not sure what planet Vinus is.

Venus is not one of the “Dog Stars”.

Come on man get ‘sirius’.

Well, I thought it would be clear to anyone it was a typo, I was to late to edit since I was trying to get Lasco C3 (blue) image.
Thanks for your comment, it certainly does make important contribution.

Thanks Vuk.. I thought it was planet 9 🙂

Vinus is Venus’s no-good, double-dealing cousin, only shows up when the grapes have been trod (to sample the fruit of the vine, of course), never pays for groceries, and just generally acts as a layabout.

Sara… are you in, or from, Australia? “layabout” sounds a bit Aussie (if that is a correct term.

Above Images are from two out of three LASCO (Large Angle and Spectrometric Coronagraph) cameras LASCO2 and LASCO 3 installed on the SOHO satellite.
A coronagraph is a special type of telescope that uses a solid disk (“occulter” or “occulting disk”) to actually cover up the Sun itself, completely blocking direct sunlight, and allowing us to see the atmosphere around the outside of the Sun (known as the “corona”).
SOHO (Solar and Heliospheric Observatory) is a European Space Agency spacecraft launched on 2 December 1995, to study the Sun. It has also discovered over 4,000 comets.

And the brief descriptions of the equipment.

You are welcome.
We have already major geomagnetic storm, it could be from one of the flairs preceding main eruption.
Aurora watching opportunity, and effects on Canadian electricity grid and transpolar airlines routes.
http://www.geomag.bgs.ac.uk/images/aphisto.png

Is this why it’s trying to snow today? And another snow for Saturday?

Have a nice weekend, Vuk, and thanks for the solar stuff!

Stay tuned for updates on what this power event means for Earth.

So, when’s it going to arrive? Well you might ask. CME scoreboard

2
Gordon A. Dressler
Reply to  commieBob

To facilitate a direct answer to the question, the current prediction for Earth impact (of at least some part of the CME particulate shock wave, obviously not associated EM radiation) is 2022-04-02T05:41Z (-7.0h, +7.0h), according to the link that commieBob provided.

Notice that’s a bit more than three days away (USA Pacific daylight time at time of this post) and also note the current ± 7 hour uncertainty on arrival time. Expected better refinement of that estimate in the next several days.

At time of this post, the range in remaining time-to-impact-on-Earth of the shock wave of the above-referenced CME is from a low of 26.4 hours to a high of 62.9 hours, with an average time of 46.9 hours based on the five different predictive methods being employed.

As before, this update from the website commieBob originally linked above.

Last edited 1 month ago by Gordon A. Dressler
0
Bob Weber(@coolclimateinfo)
Reply to  commieBob

I produce the following image every 5 minutes to keep up everyday with spaceweather.

The Ap forecast shown for tomorrow is 58, with a 55% chance of strong-extreme G3 storm.

The same active region that produced the X-flare yesterday has also been flaring C and M-flares over the previous few days along with a few CMEs; the leading edge just arrived: 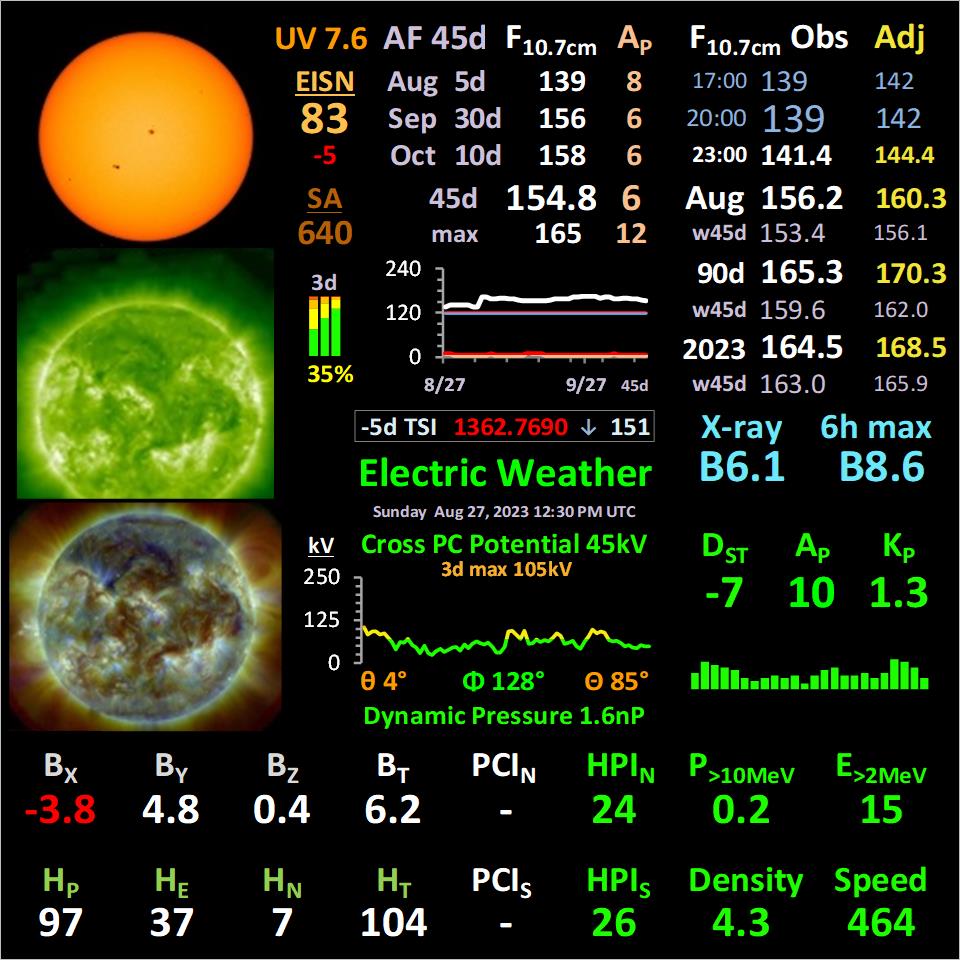 The origin of the minor CME impact last night was discussed in the most recent Solar-Terrestrial Centre of Excellence (STCE) newsletter linked below, a very detailed explanation. I highly recommend a subscription to the newsletter.

The X-flare and it’s CME will be reported in the next edition, so sign up for it.

Another M-flare today, M9.7, unless it’s upgraded to an X1; w/DRAP blackout map: 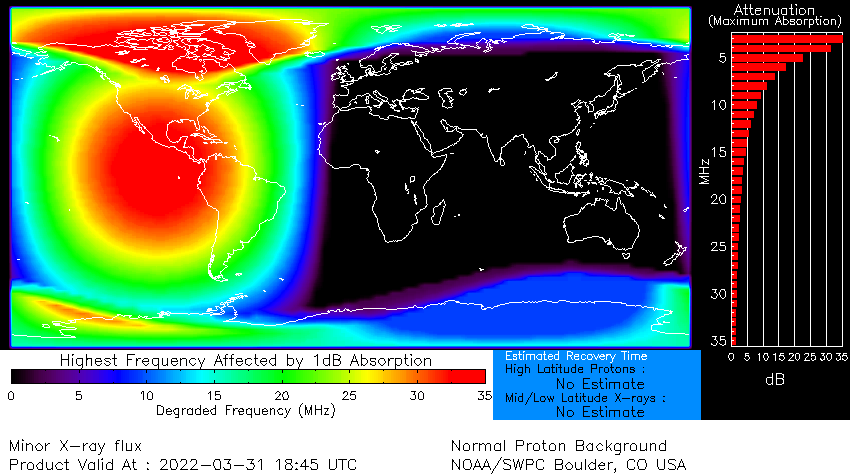 Just wondering if this particular CME is on a course to directly impact Earth, and if so will it qualify as a BOHICA event*?

4
littlepeaks
Reply to  Gordon A. Dressler

Flares in the lower scale of the X range are not that unusual during sunspot maxima.

“Cliver and Svalgaard ‘conservatively concluded that the Carrington flare was a >X10 SXR
event’ and suggested that it would have ranked high among the largest ~100 flares of the previous ~150 years.” (source: The 1859 space weather event revisited: limits of extreme activity, available at https://www.swsc-journal.org/articles/swsc/pdf/2013/01/swsc130015.pdf )

3
Gordon
Reply to  Gordon A. Dressler

So no roasted hot dogs this time? Durn, and I was so hoping. Oh, well, maybe the next eclipse in my neighborhood….

Old King Sol may be angry…at being ignored as the ruler of earth’s climate…in particular his anger may be directed at the CO2 warmists.

8
Gordon A. Dressler
Reply to  Anti-griff

Well, as the saying goes, “Rain falls on the just and unjust alike.”

2
Tom in Florida
Reply to  Gordon A. Dressler

I thought that was the rule of pet hair.

7
Craig from Oz
Reply to  Gordon A. Dressler

People using help desks located in the Far East (Philippines, India, etc) will notice an increase in call breakups. It’s bad enough when they are not native speakers, now the solar system distorts it even more.

How long before the CME reaches us?

And how much tinfoil should we buy? Will I need to cover the entire roof?

35
MarkMcD
Reply to  Patrick B

That seems a rather uncertain report compared to normal CME reporting. “circumstantial”? “apparently”?

Also, not due to the 2nd April? Are we SURE this was X class? That’s more like C-class pressure behind the CME.

Or am I thinking of the particles from the flare?

Could be the impetus for a communications blackout- back up your computer.
Will it be blamed on “climate change?” Human CO2 causes CMEs . Bad carbon.

Coronal mass ejection … and this irresponsible does not even wear a mask.

How would an X-class CME direct hit affect Bitcoin or other crypto currencies?

That could get interesting. 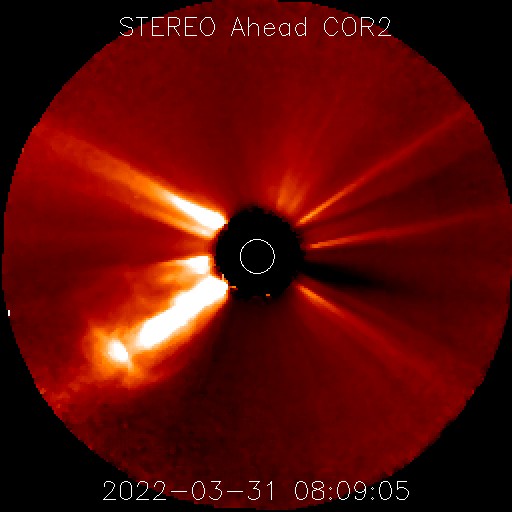 A geomagnetic storm, even of G3 class (Kp 7), may occur today.
Jet stream strength at high latitudes will increase. La Niña will strengthen.

So, Anthony, are we in for another Huntington Event?

Sorry, I meant a Carrington Event. Either way, will I have to turn off all my electronic devices?

If it is a carrington event it won’t matter if they are off or on.

0
TonyG
Reply to  Larry in Texas

Carrington was X-45, a LONG way to go to hit that level. One is certainly inevitable eventually, but who knows when?

The Solar Storm That Nearly Sparked A Nuclear Confrontation

The Guardian: Global Warming is GOOD for Rare Coral?