The result: Northern Lights in the USA as far south as Arkansas. A severe (G4-class) geomagnetic storm on Sept. 8th sparked auroras so bright that, in parts of Scandinavia, traffic stopped as drivers pulled over to absorb the display. More storms are in the offing tonight and tomorrow as Earth moves through the wake of this potent CME.

Image by Chris Cook who writes: The aurora put in a nice display tonight despite the bright moonlight. Here they are reflecting in the calm waters off Cape Cod. The best view came around 9:30pm EDT when the Moon was still low in the SE sky. 10 second exposure at ISO4000 using a Canon 6D and Samyang 14mm f/2.8 lens.

Beautiful show, very well composed. Without the other two vesels in the b/g it would have been even better. Poster material.

Without the other two vesels in the b/g it would have been even better. Poster material.
Why? Ok, so use photoshop…

Is the timing of the Mexican 8.1 magnitude earthquake a coincidence?

The earth quake is not related to the aurora, but could there be a link to the Harvey flooding.
Trillions of tons or water pushing down on Texas, deforming the crust?
Media reports were that Houston sank due to the weight 2cm, almost an inch.
(at least temporarily).
Can these forces be transmitted to faults hundreds of miles away?
Or another coincidence.
http://dfw.cbslocal.com/2017/09/07/weight-harvey-rains-houston-sink/

Geoff, you gotta put sarc tags on stuff like that! Lolol

Your calculation needs a margin of error.

Poe’s Law:
Without a clear indication of the author’s intent, it is difficult or impossible to tell the difference between an expression of sincere extremism and a parody of extremism.
;]

Indeed – and in addition to the marvel of those lights, with the Earth spinning at about 1,000 mph (at the equator) and orbiting the sun at about 67,000 mph, and with an orbiting moon that influences tides, it’s astonishing that bodies of water can become so calm.

isn’t the earth spinning at the same ‘speed ‘at the pole as at the equator ,is the pole static?or is this just a quirk of measurement

The angular velocity is the same, but the relative translational velocity depends on your distance from the axis of spin. The max radius will be at the equator.
In the space business it’s important. That’s why equatorial launch sites are preferred over higher latitudes. As we launch eastward (the direction of Earth’s rotation) the launch vehicle can take advantage of all that extra velocity to throw heavier payloads. Its just simple geometry.

It was too cloudy here last night to see anything. I’m hoping for clear skies tonight!

I’ve been looking at geomagnetic storms data for some years now, can’t remember one seeing one as strong as this

If you haven’t looked at Sep 9 data, be prepared for a shock. Try two back to back KP 8 storms showing on that chart. Go to Spaceweather.com for this and many other charts and solar videos.
I also have an app on my iPhone from the source of that page which said “Coronal holes indicate an increased chance of M6+ earthquakes on Sep 5 at 1:28 AM local (Yuma). On Sep 6 I got an alert that “the global earthquake watch is high” at 1:29 am. Later that day an alert zone was placed over an area in Mexico. The next day, Sep 7, at 955 pm the M8.1 struck in that alert zone. The method used for this map currently has a 70 percent accuracy for M7+ earthquakes in approximately 10 to 15% of global fault zones.
Most zones are not covered currently due to the amount of effort required.
Right now, there are alert zones in the path of Irma and the South American west coast.
No, I have no affiliation with the owner of this app or spaceweather.com.
It gives almost instant alerts on solar activity and geomagnetic storms. There have been a large amount of them this week, obviously.

It would be fun to convert that graph to sound and hear the magnetosphere ring.

Who knows maybe that solar activity is linked to storm formation.

neither can be proven, thus it has to be said there is no conclusive evidence.
Probability for equatorial storm formation link is much more likely.
When a solar flare occurs, the flare’s X-ray energy increases the ionization of all the ionosphere layers.
It could be postulated that when ionosphere is critically loaded by a solar storms, intense lightning discharges to the high altitude clouds will take place (sprites & elves) which in turn ‘may’ trigger a tropical storm. 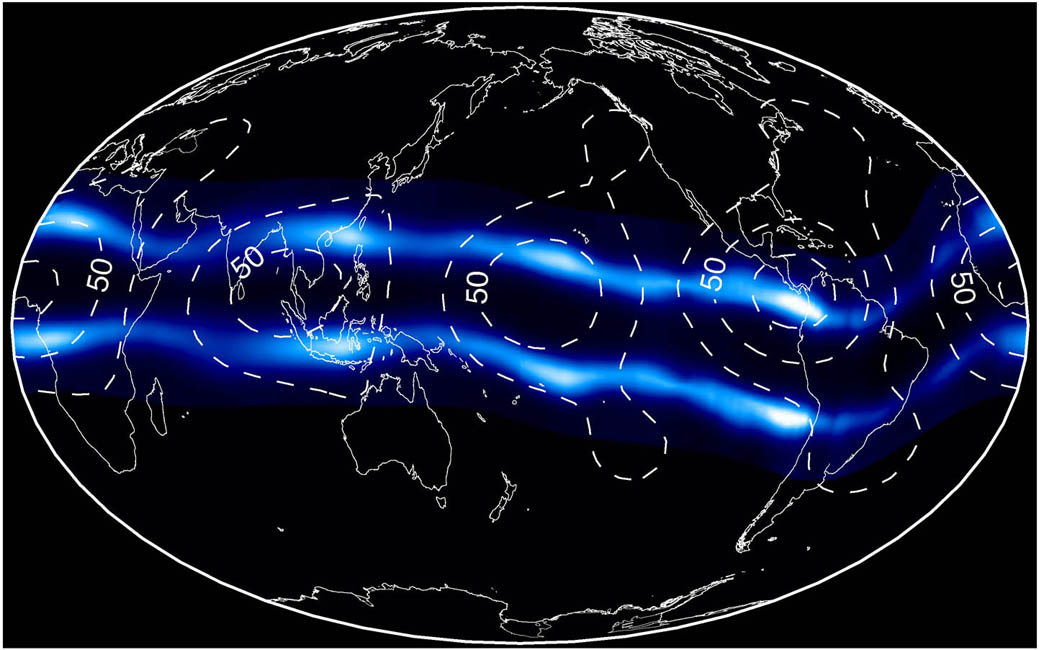 In this NASA’s image (generated from the data over period of time) the bright patches in the plasma bands are locations of the actual tropical storms at the time data was taken.
note: the ionosphere’s plasma bands directly follow geomagnetic equator, not the same but close to the geographic equator.
Do not expect a conclusive proof any time soon.

Have there been any headlines out yet despairing that climate change is causing solar storms? It’s only a matter of time I suppose.

Months of Solar Minimum followed by massive Solar Flares makes me ponder the cause and effect of El Nino’s and Nina’s with increased Southern Hemisphere Winter Antarctic Ice and this long period of Arctic Ice into Northern Hemisphere summer. All storms are driven by the temperature difference where they meet from sea level temperature up into the atmosphere temperature and the magnetosphere shielding Earth from the Solar activities at a weakened state that has been moving the Magnetic North and South Poles in a rapid pace within the last decade. Not one event but several occurring within a short time. How is it that a Solar Minimum with less Sun Spots that is said to be a cooler Sun, has occurred, when we get hotter El Nino’s and increased polar ice that result in more numerous and possibly a few stronger hurricanes when the temperature differences are greater. Also the pathway of Atlantic Ocean hurricanes are driven by the cold from the Antarctic up the West coast of Africa that push Westward at the Equator as the Jet Stream from the Northern Hemisphere is pushing across Canada downward over the Northern Atlantic Ocean. Also noted is these Hurricanes follow the path that was once the North American Waterways that used to have covered all the land up into the Arctic Ocean. Consider also that there are 4 Hurricanes pushing across the Equator towards that pathway that is surging lot’s of water onto higher land of the tectonic plate edge. Cause and effect is that it creates stress that is seen on the other side where the Earthquake just occurred at a fault line. The surge of water this created is going to retreat after the land fall and as the storm disperses more rain Northward and the water rushes back Southward those waves will hit the islands again and South America. More Tectonic Plate disturbance will occur resulting in Earthquake and Volcanic activities…and more Cause and Effect happens.

How much mass does the Earth gain from going through a cloud like this?

Way, cool! Yet one more event that can not possibly be blamed on human activity.