It’s been said that if you don’t like the weather, just wait a bit. 2023 has started off wet and windy in the west, and warm in the east… but that’s all about to change.

California seems to always need rain, but this is getting ridiculous. In the first two and a half weeks of January, downtown San Francisco has picked up nearly 9″ of rain. That’s over 3 times the normal amount! This is now their second wettest January in the past 23 years… and February is still more than a week away. It’s a similar situation in downtown Sacramento, as they have picked up over 7 inches of rain so far this month… which is also over three times their normal amount.

Southern California has been just as wet. In downtown Los Angeles, over 8 inches of rain has already fallen this month, which is 4 times the normal amount. Santa Barbara has picked up nearly 8 inches of rain as well, while San Diego has received four times their normal rainfall so far.

While it’s been wet in the west lately, it’s been warm in the east. Boston, Massachusetts and Portland, Maine have both had only about one-third of their normal snowfall to date. And the folks in New York City are still waiting for their first few flakes of the season! The parade of Pacific storms has flooded the eastern half of the country with relatively mild temperatures since Christmas. There was a major arctic outbreak in the middle of December, but high pressure over eastern Canada has prevented any additional cold blasts in the U.S. recently.

But as Bob Dylan once said: the times, they are a changin’. Long range computer models, like the GFS, are forecasting a large ridge of high pressure to develop over the west coast, and dry them out through the end of January. And while the west will dry out, the higher amplitude flow will continue to keep much of the northeast mild. The Ohio Valley should be wet.

This is a wintertime pattern that the west coast has seen all too often lately; high pressure sends the storm track northward, and the drought continues. But long range models are offering some hope this time around.

There is nice agreement among the models that the developing west coast ridge of high pressure will retrograde westward into the central Pacific by the end of the month, allowing stormy weather to return to the west coast by early February. The Madden-Julian Oscillation will move into Phase 3, which can be wet for California… except the circulation pattern in the Pacific won’t support that this time around.

For the past three weeks, the jet stream has been very zonal across the Pacific: no major north or south oscillations, which has lead to atmospheric river after atmospheric river pounding California. With strong high pressure developing in the eastern Pacific, the wet zonal flow across the entire Pacific shouldn’t return. So, while the west will break out of the dry weather and see a return of soggy conditions by early February… it shouldn’t be the deluge of rain and snow that they’ve had to begin the year.

Nice snow in the Colorado Rockies. Keep it coming!

I don’t think the drought time is over yet.
https://breadonthewater.co.za/2019/09/22/revisiting-the-87-year-gleissberg-solar-cycle/

I read an entertaining Twitter thread with some colourful language about the state not increasing it’s storage facilities for decades. Drought will never end in a desert.

Apologies to the author, but once the phrase ‘normal amount’ is used, I reject all that follows. There is an average, but no normal. The average is normally never achieved no matter to what it refers.

So scientifically, I don’t know who this article is aimed at. It wasn’t me.

The author used the lower-case “normal” so “average” of something is implied. The problem is, what was averaged?
If the author used “Climate Normals” {note the CAPS}, then the current definition is an average of the readings from 1919 to 2020. The purpose of this usage is so people do know what has been averaged.
There is nothing wrong with the usage if people follow the conventions. Somewhat similar to the score of “Love” in tennis. Tennis people don’t complain about such odd usage, because they are pros.

I guess you don’t pay any attention to Joe Bastardi either then since he also uses the term “normal”? Joe wrote a piece, defending the use of that term in meteorology a while back. Perhaps you could look it up and learn the rest of the story?

Well, thanks for all the recommendations but I have a few years on Joe, and plenty of career experience in statistics; they’re used in mining too–ask Steve McIntyre. While the use of the term within the jargon of meteorology may be well understood by insiders, it means something entirely different to the general public who is led to believe by such words that there is an annual expectation of weather events such as precipitation.

My personal view is that we must be cognizant when publishing of what others think words mean, not just what we think they mean; the resulting misconceptions may well be what prevents those outside of meteorological fields from understanding the nature of climate and accepting narratives of CAGW.

As a challenge–this is my favourite climate graph because it refers to the time scales with which I am familiar.

I can tell you what the average climate has been. Can you tell me from that graph what is normal?

‘Normal’ to most people implies an expectation of regularity. That Joe defends use of the term in professional meteorological circles doesn’t change this meaning of the term to others outside of that circle–to the benefit of those like Al Gore and John Kerry. They use the term very strongly as if there should be an expectation, and if that expectation is not met there must be something broken that needs fixing.

We must also remember that when the expectation of normal is not met, that invites use of the term abnormal–and it goes (or has gone) downhill from there.

“This is a wintertime pattern that the west coast has seen all too often lately; high pressure sends the storm track northward, and the drought continues. But long range models are offering some hope this time around.”

The author said: “Long range computer models, like the GFS,”

IOW, he was talking about models like GFS or ECMWF which predict out to 10 days, unlike the shorter term models like ICON that only go out to about 4 days. They do indeed offer short term predictions.

While these “long range” weather models short range predictions ( out to about 3 days) are generally fairly good, when you get out to their “long range” of 7-10 days, you need to take them with a larger grain of salt.
.

If I was my kids, I’d be complaining over the lack of snow in the East.
Being old and fragile, I’m more than happy about “mild” East Coast Weather- considering “mild” means “above freezing with no snow”

I was recently informed by the Mainstream Media that “global warming” is the cause of high amplitude waves in the jet stream which result in more arctic bomb cyclones.

Now the same scientific geniuses are saying that “global warming” is the cause of zonal flow of the jest stream which results in more atmospheric rivers inundating the West Coast.

Is there anything the magic CO2 molecule CAN’T do?

Thanks for the blog / article John.

Just about every evening at this time (from October thru April) my wife allows to check out the updated long range GFS forecast models; looking for what precipitation etc might be heading our way for Santa Cruz County. I try to keep it within reason, usually only looking at the 10 day model run because anything beyond that is mainly for guidance.

As great as this winter has been, I’m hoping for more.

No issues with me if the pattern shifts north

Need some snow here on the Canuck prairies

Look on the bright side folks.
We used to have boring old weather, now we get full on climate!
Can’t wait to hear the Guardian and BBC reporting of wet California. That is a real ‘climate change’ from the dry California they love to tell us all about, along with pictures of reservoirs that are (at the time of taking the picture) low. When the reservoirs are high and brimming over that will be ‘climate change’ as well.
The other good news is for all those AL Gore children that just don’t know what snow is, well now is the chance to go and see another few feet of it….again.

Doesn’t matter. A considerable portion of California will still be shown as being in drought on the Palmer Drought index. That index factors in demand. Until they build more reservoirs they will never have enough water no matter how wet it gets. 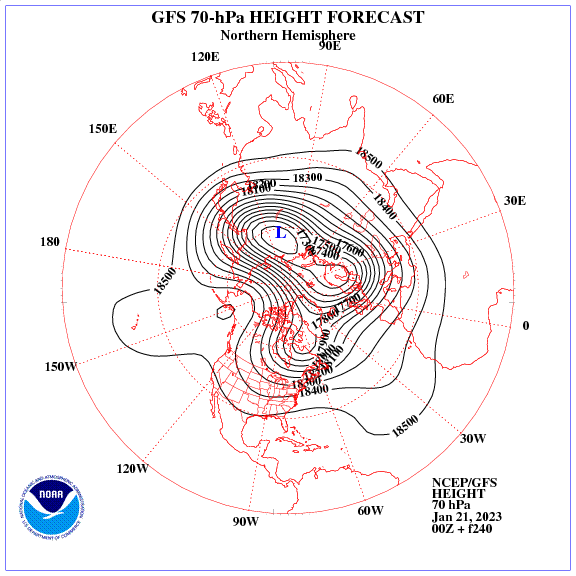 So… weather and thus climate over time is changeable and extreme events at the margins can’t be used to predict trends, and even trends can reverse, and over time balance out. Well I never.

One of the great hilarities is hearing ernest types discuss climate change on the island of Britain where we, being masters of understatement, characterise our weather as,‘changeable’. An hour is a long time for British weather. The notion that we could ever discern a climate trend from weather patterns in Britain is the stuff of Monty Python, nowadays know as the UK Met Office.

I’ve always been told that El Nino years bring more moisture and rain while La Nina years bring drier conditions. In Southern California this year is yet another example of a lack of correlation between El Nino/La Nina conditions and rainfall in the West. 2021 and 2022 were very dry La Nina years. 2023 is still considered a La Nina year and is as wet as ever. Has anybody actually seen a graph showing a correlation?

A relative living in the hills above Santa Cruz, CA informed us recently that they had received over 70 inches of rain before the last storms arrived. The pineapple express has ended for now, can’t imagine they would receive more rain in the next months. Most of the rain flowed out to the ocean. Should have cleaned out their rivers, creeks, and just about everything else!

Heat, cold and precipitation patterns tend to fluctuate year-by-year, so the only ones who pretend to get excited about these are the alarmists who try to convince the public a wet/dry/hot/cold period is the “new normal”. Fortunately most of the public scoffs at their claims or ignores them entirely. One thing is certain: no one is going to make any major lifestyle or operational changes because of isolated extreme weather events.

Sorta odd. Usually El Ninos were associated w/wet CA weather. But now a La Nina is causing it. I guess the media will call it climate weirding…..

The western US is still in an unprecedented three year La Nina condition, but experiencing El Nino like atmospheric rivers aimed further south. Goes to show that weather is dynamic and anything can happen at anytime even though pattern trends may appear different.