Unless you are on the doom news payroll.

Josh writes: “There is No Climate Emergency!” say a whole load of scientists from all over the world in a declaration.

A global network of over 1100 scientists and professionals has prepared this urgent message. Climate science should be less political, while climate policies should be more scientific. Scientists should openly address uncertainties and exaggerations in their predictions of global warming, while politicians should dispassionately count the real costs as well as the imagined benefits of their policy measures.

Of course if they ARE on the doom news payroll, well then….DOOOM!

Like the cartoon work of Josh? Buy him a pint.

Nut Zero is a climate emergency in progress

“Scientists should openly address uncertainties and exaggerations in their predictions of global warming, while politicians should dispassionately count the real costs as well as the imagined benefits of their policy measures”.

This is much too rational for those now thoroughly controlled by their permanently irrational emotions.

It is however what MUST be done to prevent actual catastrophic man-made calamity.

Last edited 29 days ago by His Majesty
18
Spetzer86

At this point, there’s too much money in the system for the politicians to let go. It really should be illegal for politicians to make money while they’re in office. Pay them a daily stipend and maybe give them a public dormitory for housing.

Or only allow people to run for political office who have proven successful in life and have saved enough to support themselves without income during their term! That would not just remove the greenhorns with big ideas and zero experience in making dreams real, but also remove the incentive to go into politics for the profit of it. With an average lifespan of ca. 80 years, there is no good reason why anybody still earning money in a regular job should sit around in parliament and government anyway! Even the Ancient Greeks and Romans had a _Senate_ grouping the oldest and wisest members of the community who had grown old enough to no longer having to do productive work.

So, politics is only for rich businessmen? So nothing changes, then? You are aware presidential candidates are chosen solely for their photogenicity, are you not?
Listen to me closely, I will type slowly so even the commies can understand:
There exists no set of parameters whereby you can determine anyone’s fitness for public office. There exists no perfect candidate, policy or plan. Nobody is perfect (except for you, of course) and nobody is unquestionably honest (except for you).
The ONLY solution is to deny all officialdom the capacity to hide, distort or misrepresent their crimes.
The ONLY solution is to publish every single cent spent by Government on a public read-only server, in real time.
Stop looking for better people, stricter rules and harsher penalties. Nobody is perfect, but with an entire nation eager and ready to earn that reward for catching you at stealing? Boy, we still won’t have perfect, but we WILL have oversight!
We shall not discuss here the Bolshevik practice of firing officials every four years, regardless of efficiency, and holding a popularity contest to choose the next incompetent kleptocratic whelp of some mafioso ensconced in the ivory towers of power.

Only independently wealthy and/or crooked politicians would ever run for office if they didn’t earn a decent salary. Politicians seem to be willing to sell influence regardless of the pay they receive because of the wealth and influence and perks the job provides them.

Consider that today there are basically two kinds of people who run for office. Those who are already millionaires, or those like Liz Cheney and AOC (who had substantial debt and said she could not afford to rent an apartment in D.C,) and who are paid some $174,000 annual salary yet manage to increase their net worth by some $30 million after only a few terms in office.

Tews, I respectfully disagree. I get what you’re saying, but at this point I think the right people are being kept out of office (in the UK and USA) in some cases for your reason, but in larger part by a system that actively encourages criminals and beats down the honest.
The power of big tech is a major factor.

You are right, and the 2020 stolen election is proof along with the failed recall elections and the hated tyrants being reelected all over the world when 90% of their citizens despise them. Expect stolen elections as the new standard from now on.

Stolen election? Stick to the science and make converts. The rants are nonsense.

Give them a cardboard box to stay in. Lots of folk will be doing that this winter.

They were lucky. We lived for 3 months in paper bag in septic tank.

Aww, we dreamed about living in a paper bag in a septic tank!

But maybe there is..

“A number of GCM results show that surface warming produced by contrails is between 0.2 and 0.3°C/decade”

Invest yourself in a solar power meter..

Here‘s a nice one

Try doing some science instead of letting others make it up.

More modelling pretending to be data in a non-reviewed, non-published white paper

But maybe there is …

E. Schaffer : Nobody will actually click on any link I supply, they will just blindly accept my “authority” …

Secondly, from its “Abstract” :

In this subject-specific white paper, we present a literature survey of past and current developments regarding the impact of contrails and contrail cirrus on the radiation field of the Earth’s atmosphere and climate. A number of recommendations for future long-term and short-term actions that are required to comprehend and quantify this important subject are subsequently outlined.

While your 14.5 year old (“white”, not “peer-reviewed scientific”) paper provides a quick “literature survey” of that time period (once again, from FOURTEEN AND A HALF years ago …), its main objective is to outline a future research program, NOT a set of final results.

6
AGW is Not Science
Reply to  Mark BLR

Let’s not get carried away suggesting that “peer reviewed scientific” means a damn thing. Peer review is a joke – exhibit A being how many of Mann’s “Hockey Stick” temperature reconstructions were “peer reviewed,” every one (including the latest) being thoroughly discredited.

“Peer review is a joke “ 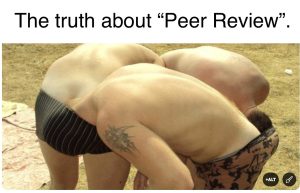 I like it. Why believe the most corrupt agenda since the Roman emperor Gaius Caesar Augustus Germanicus, better known as Caligula.

[Monbiot claimed he thought he was doing the right thing when he directed his 55,000 Twitter followers to baseless internet claims about the 70-year-old McAlpine, who is in poor health.

Wrongly naming McApline as a paedophile or linking his name via innuendo to a child sex scandal in north Wales could result in huge compensation claims against those guilty of defaming the former MP.

The BBC has already paid out £185,000 in damages, and more could follow from other parties.

Monbiot admitted: “I allowed myself to be carried away by a sense of moral outrage. As a result, far from addressing an awful injustice, I contributed to one.”

Below is Monbiot’s full apology to McAlpine…..]

McAlpine passed away not long after and Moonbat was off the hook. Like I said, he’s a very lucky fellow indeed.

Tony Blair came up with stuff like I did it because I believed it was the right thing to do… and… I did it in good faith etc [but I cannot apologise…]. And that was in Iraq,

Monbiot fell on his knees. McAlpine should have….

We will be forced to endure an ongoing climate crisis as long as there are tax dollars funding the perpetuation of a climate crisis.

The moment the tax dollars disappear, so to will the climate crisis. The disappearing tax dollar being the ‘coming doom’ the CAGW “scientists” refer to when speaking of the (C)atastrophe in CAGW.

Net Zero and Energy Transition is pickpocketing by politicians in clandestine manner.

There are absolutely no Tropical cyclones or even tropical storms active anywhere on earth today.

There are two disturbances in the Atlantic basin but neither are forecasted to strengthen.
The lack of global TS activity at this time of the year is really getting quite remarkable.

Yes, I know that the Atlantic wave train is forecasted to start pumping out disturbances, but it ain’t happening yet and besides, this post is about the relative lack of global activity. After all “climate change” is supposed to be global.

So I have a question for all of you alarmists:

Or indeed for the next 5 days which pretty much finishes off August.

On average, four named tropical storms, including one hurricane, occur by August 30, and the first intense hurricane develops by 4 September. (wiki)

We have another day of very widespread stilling over land.

Most of the windier locations are very remote. Worthwhile winds are only over the deep oceans.

0
AGW is Not Science
Reply to  Cosmic

Yes. Thereby showing their hand to everyone but the deluded. The hypothesis that leads to all outcomes is garbage.

Star Trek taught me who to believe when I was just a kid. The ones with the goatees are either Klingons or doppelgängers from the evil alternate universe. Always be suspicious of anyone wearing a goatee.

I have to shave mine off now that your on to me, so much for my career in evil.

There should be a “climate hotline” people can call to report their “climate emergency”. Just dial whine-1-1. It would be awesome.

Lol – but hey don’t give them any ideas! Can you imagine the propaganda value of having “so many calls today on the Clime-line, a new record and up x percent from last week – proof the world is end if people are worried about it!!!! – Alas, the end is nigh!”

0
AGW is Not Science
Reply to  Bruce Cobb

And those answering the calls should be well prepared to inform the callers about what utter bullshit they believe and dispense the appropriate level of derision upon them, and should wind it up with ‘there’s nothing to worry about, get on with your life.’

« On the one hand, as scientists we are ethically bound to the scientific method, in effect promising to tell the truth, the whole truth, and nothing but – which means that we must include all doubts, the caveats, the ifs, ands and buts. On the other hand,…» (Schneider)

There is no other hand, the other hand is not science.

Ethics went out with religion.

If you believe there’s no one above you keeping score then who cares about anyone else on this level?

Ends justify the means for that crowd.

”On the other hand”, never let ethics get in the way of doing the right thing!/sarc

Do they know “The Doom Song“?

Very good James! I would share but it is not going to be a hit. It’s doomed to be a one hit wonder. Thx tho.

I submitted my name to get on the list, I am an engineer, but have not heard back that I made the list.

This article appears to rubbish the no climate emergency claim – who is right?