After sustaining seemingly catastrophic hurricane damage, a primordial groundcover vital to sustaining a multitude of coastal lifeforms bounced back to life in a matter of months.

The finding, co-led by a Johns Hopkins University geochemist and published today in Science Advances, offers rare optimism for the fate of one of Earth’s most critical ecosystems as climate change alters the global pattern of intense storms.

“The good news is that in these types of environments, there are these mechanisms that can play an important role in stabilizing the ecosystem because they recover so quickly,” said Maya Gomes, a Johns Hopkins assistant professor of Earth & Planetary Sciences. “What we saw is that they just started growing again and that means that as we continue to have more hurricanes because of climate change these ecosystems will be relatively resilient.”

The team, co-led by California Institute of Technology and University of Colorado, Boulder, researchers, had been studying Little Ambergris Cay, an uninhabited island in Turks and Caicos, in particular the island’s microbial mats. Microbial mats are a squishy, spongey ecosystems that for eons have sustained a diverse array of life from the microscopic organisms that that make a home in the upper oxygenated layers to the mangroves it helps root and stabilize, which in turn provide habitats for even more species. Mats can be found all over the world in wildly different environments, but the variety this team studied are commonly found in tropical, saltwater-oriented places, exactly the coastal locations most vulnerable to severe storms.

In September 2017, the eyewall of Category 5 Hurricane Irma directly hit the island the team had been working on.

“Once we learned everyone was OK, we were uniquely well-poised to investigate how the mat communities responded to such a catastrophic disturbance,” Gomes said.

The tropical cyclone’s impact was immediately devastating, choking the mats with a blanket of sandy sediment that decimated new growth. However, as the team checked on the site first in March 2018, then again in July 2018 and June 2019, they were excited to see the mats regrowing, with new mats visibly sprouting from the sand layer in as little as 10 months.

“For islands and tropical locations with this type of geochemistry, Florida Keys would be one in the United States, this is sort of good news in that we think that the mangrove ecosystem as well as the microbial maps are pretty well stabilized and resilient,” said lead author Usha F. Lingappa, a postdoctoral scholar at the University of California Berkeley.

The work was supported by: the Agouron Institute, NASA Research Opportunities in Space and Earth Science grant 80NSSC18K0278, and the NSF GRFP.

In other words, life finds a way….

Not at all surprising

…and ecosystems that have survived millions of years of extreme natural events are more resilient than snowflake researchers imagine.

earth heals itself… well glory be !

but the variety this team studied are commonly found in tropical, saltwater-oriented places…in other words…little drinks with umbrellas…and a tropical vacation

So on the one hand climate change merely changes storm patterns, but on the other they are goiing to get more severe. CO2 the magic molecule.

Just a shame that The Microbial Mat that is = Topsoil aka the A Horizon is not so resistant to:

Oh well, maybe Marina Girl still around, we need her much more than these Anthropomorphic Muppets – to teach us how to survive in the water when there’s no dirt left.

Oh look, here she is. None too happy, has someone trodden on her Microbial Mat?

What I love is the claim that it takes 10,000 to 100,000 years to form an inch of topsoil. Yeah, but most of Canada was under over a mile of ice and there was no topsoil when it melted. However, huge areas of Canada are incredibly rich wheat fields due to the topsoil that has formed in the last 10,000 years, inches of topsoil, not just an inch or less.

Sure. That’s why the biosphere is becoming continuously more productive rather than less.

they were excited to see the mats regrowing, with new mats visibly sprouting from the sand layer in as little as 10 months.

Microbial mats? You mean the ecosystem that defined the Proterozoic Era, that defined life on planet Earth for 2 billion years? A vulnerable system?

This is obviously some strange use of the word “vulnerable” that I wasn’t previously aware of.
H/T Douglas Adams.

What kind of a Scientist starts with a false presumption (hurricanes more frequent), studies a sector of the environment, then admits that (even if the assumption is false) there is no actual damage? The tendency to blend politics and science is quite alarming. Follow the money?

Let’s get this straight, just so we don’t misunderstand. These mats grow on islands that have been in the direct path of hurricanes for millennia. They have adapted to those conditions. They persist in the face of those conditions. It’s a miracle. Okay. Now I get it.

“as climate change alters the global pattern of intense storms.”

I’d like to know what they mean by this, because as far as I can see the little Turks and Caicos islands have been in the middle of a hurricane highway forever. 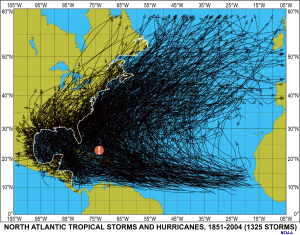 They tweaked a model?

the little Turks and Caicos islands have been in the middle of a hurricane highway forever.

Quite so, It is the growth of the microbial mats that creates the foundations of the archipelago.
Memories of a Warm World: Notes on a Geological Field Trip to West Caicos, British West Indies.

Really enjoyed your paper. Using Google Earth really helped to better visualize what you were describing.

Thanks Joel.
During the week we spent on the Caicos, one day was also spent visiting the Mangroves on the lagoon side of North Caicos. The resilience of this ecosystem as it expands south into the Caicos lagoon was clearly evident in the field.

Well, what do you know. Another of the natural ecosystems like the Great Barrier Reef that bounce back naturally after “catastrophic” natural disturbances without the “need” for any interference (“help”) from opinionated academics seeking multi million dollar grants.

The academics don’t lift a finger to ‘help’ anyhow, Barry. They just wring their hands over disasters the computer models were programmed to spit out showing we’re all gonna die in 50 or 80 years.

I wouldn’t hire them to ‘help’ clean out my flower beds. I can’t afford their rate, all the coffee they’d drink, and the standing around telling me I’m doing it all wrong, according to the Theory of Flower Beds, while ‘helping’ me.

They don’t really do anything but raise the alarm about something terrible that maybe, might, could possibly happen long after they are retired.

From the article: “as climate change alters the global pattern of intense storms.”

There’s no evidence showing this is happening. Is the author just ignorant of this fact, or is he deliberately lying about the weather?

The US hurricane graph below shows no recent sign of intense storms increasing in this part of the
globe. (from cited article in Joseph D’Aleo’s ICECAP post) 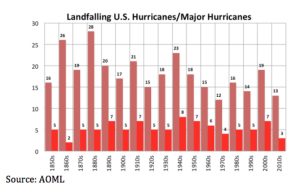 Just pathetic. But before we become judgmental remember we don’t have to bow and scrape for money in the academic world.

Two things. First, climate change is NOT changing storms patterns. The time frame is too small to claim such a thing and the climate has been here many times before.

Second, to be realistic, we are seeing patterns that we simply do not recognize. Our knowledge of the last 12 thousand years is ver limited. However, we do know that the Holocene Optimum, 8000 years ago, was the warmest and all of the Warm Periods since have been succeedingly colder, with the warm peaks forming a line downward, always cooler, on after another. Our latest warm peak was 1998 and cooling if now happening.

The point being is that the climate is doing nothing historically abnormal. These mats bounce back so well because they have been through all this before and many times. Also, the ignorant are not aware that continental drift spreading the continents out from each other on a larger planet is by definition going to be changing ocean and wind patterns. That’s a given.

Why is it that supposedly intelligent, educated people are surprised that natural systems are able to adapt to natural changes and traumatic weather events? It should be the primary assumption that nature is designed for resilience through evolutionary experience. Instead we live in a world where an entire ecological industry has emerged that self-justifies by claiming nature can’t survive without it.

It warms my taxpaying heart to see (based on the author list) the goodly number of people I help to go on multiple annual tropical paradise excursions. And just look at the scholarly results that further Man’s understanding of previously unknown natural processes.

Well, Maya Gomes. The data shows that you are either:

A. Ignorant of what is easily ascertainable (especially for someone in your field of study).

These 2 statements of yours are either demonstrations of ignorance to the point of incompetency or of lying:

2. we continue to have more hurricanes because of climate change

While, as Joel pointed out above, I can feel some empathy for one apparently in desperate need for funding from a government hell-bent on keeping the solar-wind-electric vehicle markets propped up, such desperation is only pathetic; it is not an excuse to lie (and, if you are, on the contrary, incompetent, well….).

For anyone (besides Ms. Gomes) reading here:

2. hurricanes have not become more frequent — at all.

The same for the desert while at Arches National Park I read a sign tread light stay on the path if you don’t you will cause the soil not to develop. The morons have not figured people have not been trampling all over that park long before it was a park and yet no soil. The idiot have not figured out to get soil you need water. Pour water on that land and the soil will come since soil is organic matter and to get organic mater you most of the time need water.

I grew up in Minnesota they was no soil on the glacial drift when the ice receded. Now there of 12 to fourteen inches in most places except there the granite has been striped bare. I assume that may be due to nothing there to hold water long enough to let the soil form.

The ground in the Utah is covered by cryptobiotics, bacteria that prevent soil erosion from wind and water. This bacteria holds the top layer in place but if stepped on, will break down and create devastating erosion that destroys the few plants that grow there. Water on the land would destroy the surface without the biocrusts to hold it together.
So yes, please do not walk off paths in Utah!!

Well if the insects are almost gone already, and plankton a distant memory, its only a matter of a few years before bacteria also go extinct, because cluymutt. Then we’ll be proper screwed. Can’t be arguing with the science – mind.

China Rejects NASA Claim They Want to Take Over the Moon

Norway Heatwaves Are Perfectly Normal, Despite What Paul Krugman Says