I said last year that wandering polar bears appeared to be the new ‘starving’ polar bears that were formerly the go-to victims falsely blamed on lack of ice due to climate change and here we are again. Polar bear specialists and their cheer leaders so seldom disappoint.

Although not one of the Canadian news outlets that reported on the fat polar bear that was shot after unexpectedly showing up on the Gaspé peninsula two weeks ago blamed this incident on global warming, a few days later The Guardian in the UK stepped up.

Of course it did. My own report of the incident is here, from 1 May 2022, in case you missed it (with sea ice charts, as always).

Below you will fine the predictable narrative feed to the public by the polar bear specialists contacted by The Guardian for their story, Canadian police fatally shoot polar bear that wandered into Quebec community: Bear had wandered hundreds of kilometres south of species’ territory in incident experts say could become more common [Leyland Cecco, 3 May 2022]

The bear is believed to have wandered in from sea ice north of the community, but would have needed to swim portions of the St Lawrence River to reach the northern tip of the Gaspé Peninsula.

It was shot dead on Sunday morning – an outcome experts say was inevitable.

“The moment I heard about where this bear was, I thought, ‘this is a dead bear,’” said Andrew Derocher, a professor of biology at the University of Alberta. “I worried it was going to show up someplace where it shouldn’t be, cause a problem, and it’s going to get shot.”

“We’re seeing more bears spend more time on land – including places where they haven’t been seen before,” said Geoff York, senior director at Polar Bears International. “The deck is really being reshuffled for polar bears – they have less consistency and variability. Things that may have worked for them in the past aren’t working for them today.”

Bears spending more time on the land means the likelihood of encounters with communities only increase, said Derocher.

“I can’t draw a straight line between climate change and events like this. But in general … these events are occurring more and more often. And we predict that they’re going to become more common.”

Well, I predict these events will increase as well: because of sea ice present where it usually forms and more bears than there used to be. That Gaspé bear wouldn’t have gotten there without sea ice and being capable of swimming long distances, for which polar bears are famous.

This week, there is still sea ice in the Gulf of St. Lawrence:

And far from being ‘less ice’ than usual, the blue areas on the chart below indicated this is unusually abundant ice for this region (and for southern Labrador) for the 2nd week of May:

It looks more like population pressure expanding the range of polar bears. There are enough healthy polar bears to expand into vacant habitat

While this and other stories of wandering bears are most likely due population pressure, rather than expanding into vacant high quality habitat it could be the case that some bears are being forced into sub optimal habitat. If an individual is unable to live in an ideal habitat due to competition from other bears it seems likely that it will try to eke out a living in marginal areas rather than go hungry or keep getting attacked.
Either way it seems likely that such incidents will increase in the future as long as polar bear numbers remain the same or continue to increase. Does anybody know what the estimated carrying capacity of the arctic is? Obviously this would be based on a lot of assumptions about future sea ice amounts, prey availability etc. After 30 years or more of increasing numbers are polar bears close to reaching maximum population size?

It really is worse than we thought. And even worse than that is the simple fact that nobody is talking about it.
This is a true species wipe out, a 100% death rate. A total disaster.
Take a look at every polar bear alive today, count them if you like.
In 40 years, they will all be dead. Every last one of them. Every single one you see today will be *Dead* in just 40 years. How can this be seen as anything less than a total catastrophe for the species?

I’ve done some pretty good practical jokes in my time, and I have a fantasy of sneaking one into Michael Mann’s house while he is away.

Don’t ask, don’t tell. Yeah, I know that was some old policy related to gays in the military, but I’m pretty sure it applies here, Scissor.

Make sure you have something someone they would like to eat.

I have a simple question for Dr. Crockford.

How did you acquire such an abundance of common sense?

People can get all squinched up and wallyrumpuss over models of guesstimates of prolly-make-believe skewed-statistics, but somehow Dr. Crockford manages to keep her eyes open and just observes what is happening and takes notes.

(👍👍 Dr. C. keep it up! I enjoy your reports based on observations. I don’t comment hardly at all because there’s little need after you’ve weighed in.

Then there is your colleagues’ modeled speculation. Errmmm…. no thanks.)

Facts? Is that all you have are facts? 🙂 I always enjoy your learned take on the plight of the polar bears. Thank You

Animals have this strange habit of moving around.
That’s why they are called animals.

Philip, I wondered about that, so …
Etymology
The word “animal” comes from the Latin word animalis, meaning “having breath”.
Moving around does require having breath.
I’m curious about such things. I learned something today.

Hey, thanks, John. I didn’t think to look that one up. You did. Thanks again. 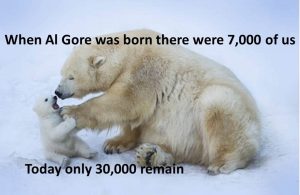 Like the fat Polar Bears, Al Gore looks like he has eaten a few too many Harp Seal pups.

Tru dat! I’m sure ‘Big Al’ finds them to be quite tasty.
–
–
Wait up…. Inquiring minds want to know… is Algore a vegan? Just askin’.

(Isn’t Scotch vegan? I know I only drink vegan ale.)

“Is Algore a vegan”?
Not sure where he came from? He could be Vegan, but more likely he is just another opportunistic political failure, who decided money was preferable to honesty and integrity.
Sadly, he is not alone in his ‘ethical’ life choice.

I doubt he is from Vega. After all, it is 40 light years away!

“Bear had wandered hundreds of kilometres south of species’ territory”

So.. heading into warmer territory.

Must have noted Canadians moving to Florida.

Thanks, Susan.
Do biologists study the bears killed in this manner, and will a report follow?
Guessing is fun but doesn’t provide satisfaction.

Hi John,
There is usually a necropsy done on such animals and I expect a report of sorts is filed somewhere but these are hardly ever made public. Exceptions are high-profile cases where the bear has killed someone but even then, a publicized report is not a given. I expect if a journalist were to ask and pursue an answer, they might eventually get one, but when would THAT ever happen?

This is kind of like blaming increasing shark attacks on climate change or some other idiotic reason. It wouldn’t be surprising that there are now more shark attacks than there were in the mid to late 20th century. Makes perfect sense that when you restrict or stop hunting/fishing animals that there will be more of them. Same thing with polar bears. The only thing that has dramatically changed in the last 40 some years is that trophy hunting of polar bears has banned in the US and greatly restricted elsewhere.

“The moment I heard about where this bear was, I thought, ‘this is a dead bear,’” said Andrew Derocher, a professor of biology at the University of Alberta.”

A one trick pseudo-biologist.
Blame lack of ice, no matter how much ice there is.
Comes from living indoors during the entire winter season. That and getting flashed in the face by all of the cameras when he comes outside to bloviate.

Inquiring minds want to know: is, is Andrew Derocher, a professor of biology at the University of Albert, a snowbirder in Florida?

I don’t see much field work being done during the Arctic Winter. But hey! What do I know? That may be primetime.

Dr. Crockford,
Thanks for continuing to educate us with authentic polar bear science based on actual observations and trustworthy, objective discernment.

It’s wonderful to see the polar bears flourishing but not to see them becoming a nuisance/danger to humans.

My impression is that the push to put Polar Bears on the Endangered Species list and the subsequent increased restrictions on hunting them has been the primary cause of their population growth.

I seem to remember that the increased restriction on hunting them resulted from their being put on the Endangered Species list. IOW the action of placing them on the list as a result of the Climate Alarmist’s pressure while having the desired immediate effect for the Alarmists has in the long run has become a strong argument against their claims.

The timeline seems to be a little different. Russia banned Polar Bear hunting in 1957, USA in 1972 and Norway in 1973 – effectively becoming a world wide ban about then. Quotas have restricted Seal hunting since about 1971 and in 2009 Russia banned hunting of seals under 1 year old. The USA banned Walrus hunting in 1972 and other countries have restricted walrus hunting and banned the trade in walrus ivory since then. The Polar Bear was put on the USA endangered species list in 2008 when their populations had started to recover from overhunting – the timeframe does seem to support a more political motive for the action.

They never stopped the hunts completely by any means. They still sell tags for Polar bears!

They didn’t stop the hunts. They just cut way down on them by limiting the tags and thus making them expensive in the 80s due to a noted decline in numbers from over harvesting in the 60s and 70s.

So yes, they started cutting the numbers before they were classified Endangered, but afterwards they did so even more and also made agreements with the tribes that has resulted in their traditional takes being cut down considerably also.

Ah, yes – that was an exclusion fiercely contested by the indigenous people of Alaska and Canada who claimed that their cultural heritage depended on their being able to hunt Polar Bear, Seal and Walrus. Let’s just say that their ‘take’ is closely monitored and controlled and only hunts authorised by the local indigenous people are allowed (with the occasional ‘paying guest’ of course).

Still very much ice in the Arctic in mid-May. China Rejects NASA Claim They Want to Take Over the Moon

Norway Heatwaves Are Perfectly Normal, Despite What Paul Krugman Says