Perhaps the hardest part of reaching net zero emissions by 2050 is the “net”. We won’t get to zero emissions without it, but it’s tricky and presents us with a great temptation to turn the whole exercise into a rort.

The goal is “net zero” because it’s neither possible nor sensible for us to eliminate every last emission of carbon dioxide and other greenhouse gases. But that won’t be a problem provided we can offset what few emissions remain by finding ways to remove from the atmosphere an equivalent amount of carbon dioxide that’s already there.

So, some emissions may never be eliminated and others would cost far more to eliminate than to offset by other means.

The obvious way to offset is to remove carbon dioxide from the atmosphere by beefing up our natural sinks – many of which have been diminished by economic development.

And the sad truth is that Scott Morrison doesn’t have clean hands when it comes to using carbon credits to mislead us. He’s claimed repeatedly that our emissions are falling and we’re on track to “meet and beat” our target of a 26 per cent reduction by 2030.

We don’t need the Sydney Morning Herald to tell us the green fraud accusation is locked and loaded, but it is nice to have our suspicions confirmed.

If Scott Morrison declares Australian Net Zero, to try to please COP26, it will be perceived as a sign of weakness, not strength. Emboldened greens will double down on denouncing ScoMo as a climate deceiver, and as policy details are revealed, there is a good chance climate skeptics like myself will agree with them.

As Australians head towards the polls in 2022, Scott Morrison would do well to remember that no Australian Prime Minister ever won an election by looking weak.

“Australia has about 370 million tonnes worth of carbon “overachievement” on its Kyoto 1 and Kyoto 2 targets in the bank.

That’s a considerable amount towards the 695 MT of carbon Australia has to “abate” – or eliminate from the economy – between 2021 and 2030 to meet the Morrison government’s 26 per cent emissions reduction target.”

Note that Australia is one of a very small number of nations that signed the Kyoto Agreement and emissions reduction targets allocated.

Of course not. That would give Australia an opportunity to keep capitalism going, and reduce the opportunity for UN led global governance.

That’s because they got a sweetheart deal out of Kyoto because of their very high thermal coal usage for power production…at the time , but of course the household solar usuage has exploded since then. As well some the land that was sequestered as carbon sink and thus not cleared and deemed carbon release , was given ridiculously high carbon squestration compared to pre Kyoto.

Why not just claim, that based on previous 10-years-to-stop-climate-change-declarations already having expired, there is nothing left to do other than mitigate any problems as they come up, and enjoy life while it lasts.

According to the greentards the world has already ended and we are all dead, so the can shut the fz88k up about it now.

The future King could revert to using Premium Unleaded in his vintage Aston Martin and enjoy the engine performance as the creators intended.

Anything Ross Gittins writes about climate change should be ignored.

Yes, Ross Gittins, he would’ve fitted right in teaching socialist scientific economy. I know, because I lived through such times.

If Nikita Khrushchev could bring his shoe to the lectern at the UN, Scott must be allowed to bring his lump of coal.

I read the SMH Ross Gittens piece yesterday.
Gittens is a committed climate zealot and has been for years. However he is worried about fraud with carbon credits.
Quite prescient.
Shades of Professor Simon Lewis in the Guardian,”We can’t solve the Climate Crisis with Carbon Accounting tricks”.
And China has just rated a cargo tanker with 30,000 tonnes of oil from Angola to Singapore as carbon neutral!
All of this zealotry is part of an orchestrated monologue in the Australian press including News Corporations Ltd newspapers under the “Mission Zero” publications day by day since 11 October.
“Mission Zero”poses as a “conversation” or “dialogue” with the public when it is totally unbalanced propaganda promoting utterly damaging Net Zero 2050.
In Australia we are awaiting (on Sunday night) the outcome of a party meeting by The Nationals the junior partner in the Federal Coalition government.
If the answer is ‘no’ to Net Zero 2050, or increased carbon reduction commitments by 2030,it will all be down to the outcome of COP26 at Glasgow.
Can Pope Francis, Boris and Alok Sharma, The Royals, President Biden,John Kerry,Greta Thunberg and most of the West’s liberal media get Glasgow over the line?
Great theatre and follow WUWT for November outcome.

For years, the ongoing Josh cartoon about the lack of money in the COP process has exposed the weakness of the climate crusaders: Average voters will not spend money on fairy dust.

Without hard money commitments, the Third World will not give Leftists a face-saving gloss of “consensus” at COP26. Finger-pointing signs will be at a premium at the end of COP26.

Biden is probably going to be putting some money into this deal. The leeches are getting excited.

How about credits being applied?

Where the greens are concerned it’s never enough

Don’t worry about elections Scottie. The UN will install whoever it needs, one way or another.

This lecture to Australia in 2014 by Christopher Monckton will go down in history, if the censors dont get to it first.

So “Net Zero” is the talkfest’s big topic is it?
Here is my take on this ridiculous “climate” target. 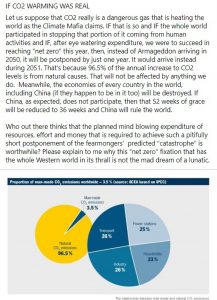 ‘Net zero CO2 emissions by 2050’ is a simple concept which drives agenda driven zealots and activists nuts. This is purely because they ignore the “net” in any discussion and just assume all anthropogenic emissions of CO2 into the world’s atmosphere are to be totally eliminated by the magic year. Of course the latter is impractical, impossible and would be a stupid goal for any modern society.

I studied vegetation population dynamics and carbon sinks over large areas of the north eastern Australian landscape for over 40 years. As the current COP26 frenzy has built up I have drawn on this experience in a short (4 page) summary note which has been passed onto selected Australian politicians across the political divide.  I doubt they will let it influence their respective agendas. But if any reader is interested in this subject from an Australian perspective see: https://www.keepandshare.com/doc22/112735/australia-has-already-reached-net-zero-co2-emissions-7-pdf-1-0-meg?da=y . [There may be daily viewing limits].

Where will Australian govt.(s) spend their authoritarian capital? Bankrupting individual States with green failure compliance, unrelenting covid lockdowns, outlawing bikers with tattoos, or going for broke with all of the above?

Lying to greentards is a positive. All that they “believe” and everything they say is a lie, so lying to them is exactly what they have earned. Tell them anything they want to hear, then laugh in their faces while screwing them to the wall.

The END of a free society.

“A lie gets halfway around the world before the truth has a chance to get its pants on.“ Winston Churchill

The Greens will just read the headlines and not dig into the details whereas his supporters will read the “fine print” and realize it is all phony. Thus you have the best of both worlds.

I think Eric’s question comes from the fact that he reads the “fine print” and realizes the details are important… so the situation makes no sense. However, the Greens don’t read the “fine print” or look into the details… they just rely on what “scientists say” and go no further. I think this is the reason that the CAGW movement has gotten as far as it has. IMHO

”Scott Morrison would do well to remember that no Australian Prime Minister ever won an election by looking weak.”

Both major parties going down the net zero path, the Greens are toxic, independents are there just to feather their own nests,…Pauline Hanson for Prime Minister then.

Good headlines seeker but read below and try and sift through the garbled contents.

Meet the CO2 Suckers: More Mechanical Monstrosities to Save Us from Climate Change

The Snow Hits the Fan on Saturday: Global Warming Alarmism to Follow