Shortly after it formed, the Moon was covered in a global ocean of molten rock (magma). As the magma ocean cooled and solidified, dense minerals sank to form the mantle layer, while less-dense minerals floated to form the surface crust. Later intense bombardment by massive asteroids and comets punched through the crust, blasting out pieces of mantle and scattering them across the lunar surface.

Recently, a pair of NASA studies identified the most likely locations to find pieces of mantle on the surface, providing a map for future lunar sample return missions such as those under NASA’s Artemis program. If collected and analyzed, these fragments from deep within the Moon can provide a better understanding of how the Moon, the Earth, and many other solar system worlds evolved.

“This is the most up-to-date evaluation of the evolution of the lunar interior, synthesizing numerous recent developments to paint a new picture of the history of the mantle and how and where it may have been exposed on the lunar surface,” said Daniel Moriarty of NASA’s Goddard Space Flight Center, Greenbelt, Maryland and the University of Maryland, College Park.

Magma oceans evolve as they cool down and dense materials sink while light materials rise. The formation of magma oceans and their evolution are thought to be common processes among rocky planets and moons throughout our solar system and beyond. Earth’s Moon is the most accessible and well-preserved body to study these fundamental processes.

“Understanding these processes in more detail will have implications for important follow-up questions: How does this early heating affect the distribution of water and atmospheric gases of a planet? Does water stick around, or is it all boiled away? What are the implications for early habitability and the genesis of life?” adds Moriarty, lead author of the papers, published August 3 in Nature Communications and January 2021 in the Journal of Geophysical Research.

Large rocky objects such as planets, moons, and large asteroids can form magma oceans with the heat generated as they grow. Our solar system formed from a cloud of gas and dust that collapsed under its own gravity. As this happened, dust grains smacked into each other and stuck together, and over time this process snowballed into larger and larger conglomerations, eventually forming asteroid and planet-sized bodies. These collisions generated a tremendous amount of heat. Also, the building blocks of our solar system contained a variety of radioactive elements, which released heat as they decayed. In larger objects, both processes can release enough heat to form magma oceans.

However, the details of how magma oceans evolve as they cool and how the various minerals in them crystalize are uncertain, which affects what scientists think mantle rocks may look like and where they could be found on the surface.

“The bottom line is that the evolution of the lunar mantle is more complicated than originally thought,” said Moriarty. “Some minerals that crystallize and sink early are less dense than minerals that crystallize and sink later. This leads to an unstable situation with light material near the bottom of the mantle trying to rise while heavier material closer to the top descends. This process, called ‘gravitational overturn’, does not proceed in a neat and orderly fashion, but becomes messy, with lots of mixing and unexpected stragglers left behind.”

The team reviewed the most recent laboratory experiments, lunar sample analysis, and geophysical and geochemical models to develop their new understanding of how the lunar mantle evolved as it cooled and solidified. They used this new understanding as a lens to interpret recent observations of the lunar surface from NASA’s Lunar Prospector and Lunar Reconnaissance Orbiter spacecraft, and NASA’s Moon Mineralogy Mapper instrument on board India’s Chandrayaan-I spacecraft. The team generated a map of likely mantle locations using Moon Mineralogy Mapper data to assess mineral composition and abundance, integrated with Lunar Prospector observations of elemental abundances, including markers of the last remaining liquid at the end of lunar magma ocean crystallization, and imagery and topography data from Lunar Reconnaissance Orbiter.

At around 1,600 miles (about 2,600 kilometers) across, the South Pole – Aitken basin is the largest confirmed impact structure on the Moon, and therefore is associated with the deepest depth of excavation of all lunar basins, so it’s the most likely place to find pieces of mantle, according to the team.

For years, scientists have been puzzled by a radioactive anomaly in the northwest quadrant of the South Pole – Aitken Basin on the lunar farside. The team’s analysis demonstrates that the composition of this anomaly is consistent with the “sludge” that forms in the uppermost mantle at the very end of magma ocean crystallization. Because this sludge is very dense, scientists have previously assumed that it should completely sink into the lower mantle early in lunar history.

“However, our more nuanced understanding from recent models and experiments indicates that some of this sludge gets trapped in the upper mantle, and later excavated by this vast impact basin,” said Moriarty. “Therefore, this northwest region of the South Pole – Aitken Basin is the best location to access excavated mantle materials currently on the lunar surface. Interestingly, some of these materials may also be present around the proposed Artemis and VIPER landing sites around the lunar South Pole.”

More about the missions and partners:

The research was funded by NASA’s Center for Research and Exploration in Space Science and Technology II program under a cooperative agreement with the University of Maryland. LRO is managed by NASA’s Goddard Space Flight Center in Greenbelt, Maryland, for the Science Mission Directorate at NASA Headquarters in Washington. Launched on June 18, 2009, LRO has collected a treasure trove of data with its seven powerful instruments, making an invaluable contribution to our knowledge about the Moon. Launched October 22, 2008, Chandrayaan-1, India’s first deep-space mission, played a crucial role in the discovery of water molecules on the Moon. Among its suite of instruments, it carried NASA’s Moon Mineralogy Mapper, an imaging spectrometer that helped confirm the discovery of water locked in minerals on the Moon. NASA’s Jet Propulsion Laboratory, Pasadena, California, designed and built the Moon Mineralogy Mapper. Lunar Prospector, Launched January 8, 1998, was designed to collect data to compile the first complete compositional and gravity maps of the Moon during its planned one-year mission in lunar polar orbit. The mission was managed by NASA’s Ames Research Center at Moffett Federal Airfield in California’s Silicon Valley.

For years, scientists have been puzzled by a radioactive anomaly in the northwest quadrant of the South Pole – Aitken Basin on the lunar farside. The team’s analysis demonstrates that the composition of this anomaly is consistent with the “sludge” that forms in the uppermost mantle at the very end of magma ocean crystallization. Because this sludge is very dense, scientists have previously assumed that it should completely sink into the lower mantle early in lunar history.

1
The Saint
Reply to  zee raja

When did NASA scientists have time to figure this out between their search for Muslim outreach and global warming research?

“Because this sludge is very dense, scientists have previously assumed that it should completely sink into the lower mantle early in lunar history.”

Apparently these experts ignore that liquids have surface tension.

The dominant geological feature of the south polar region is the Aitkin basin. It appears to be a massive impact crater complex and likely mantle exposure. Even cooler than Hadley-Appenine… 😎

How did they map thorium from orbit?

Hyperspectral cameras are often used on Earth from space for such things.

They also used spectrometers on the LRO and India’s orbiter.

Gamma ray scintillometer. The natural decay of Thorium 232 produces some particles and gamma rays, but the scintillometer most efficiently detects gamma rays from daughter products.

On earth, the surface concentrations of elements Uranium, Thorium and Potassium are routinely mapped from airborne radiometric surveys, detecting decay products from naturally-occuring radioactive isotopes of each of those elements. You can also use light absorbtion features from hyperspectral scanners to detect the presence of various minerals. You can get an approximate concentration of each element, giving you a hint at what mineral species might be present and in what concentrations. The principle is similar with orbiter surveys on the moon.

Thorium has two origins, Th 232 is a natural element, whereas Th 230 is a product of U238 decay. Thorium 232 is more abundant, and is, at least on our planet earth, associated with more silicic and alkaline igneous material, not with denser more mafic igneous material. Exceptions would be concentrations during sedimentary processes. Why the thinking is that on our moon thorium is associated with meteorite strike ejected mantle material, which tends to be more mafic, is unknown to me (as are many other things).

My thoughts exactly, Ron. They don’t tell us what minerals they think the “sludge” would be composed of, so it’s hard to judge the thought processes involved, but it does sound counter-intuitive. Plus, in magmatic environments, thorium and uranium “always” go together, and there’s no mention of uranium. But that’s a dirty word, perhaps they just left it out of the public arena to avoid provoking the crazies.

On the image, at extreme edge on the lower right side, is what looks like an even bigger, and equally strong radiometric anomaly. I wonder what that’s about.

Obviously, there’s a lot they aren’t telling us in this short article, leaving us with more questions than answers. Typical NASA.

Shortly after it formed, the Moon was covered in a global ocean of molten rock

This has made a lot of people very angry and been widely regarded as a bad move.

There are still people today who cling to the Apollo-hoax nonsense, unfortunately.

I’m surprised they haven’t shown up in this thread yet. I’ll be shocked if they don’t show up for my Apollo 15 post scheduled for later today.

If you’re suggesting that they might have landed near those anomalies, I’m not sure that the Apollo missions had the spare delta “v” to go circumpolar and make such a landing. It looks like the landings were between -20 and +50 of the lunar equator.

I’m surprised no space cadets have suggested that lunar thorium can either be used to fuel LFTRs to power lunar colonies or brought back to earth for use as nuclear fuel.

That’s a real find – the thorium, that is. No need to try to get permission to launch nuclear materials from Earth, now. Building a solar-powered linear accelerator to produce a boatload of spallation or fusion neutrons will enable production of U-233 (a fissile isotope) from the thorium on the Moon.

By the way, the correct term is: “Liquid hot magma.” 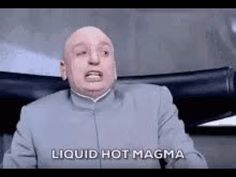 Extraordinary photograph of the moon. Its almost 100% covered with impact craters. Given the Earth and moon are about the same age, it means the Earth has probably been bombarded with the same density of bolides over time. Only on Earth the big ones get through, and an enormous number of smaller ones must be burned up in the atmosphere.

Lucy Is Going to Space!

SMH Suggests Any Aussie Net Zero Pledge Might be Misleading