Climate is particularly important to farmers in agrarian countries. Drought could mean the difference between life and death.

India, for example, is predominantly agrarian. Of the country’s 1.3 billion people, 300 million, nearly a fourth, are poor even by Indian standards, and millions of others are on the borderline. So, agriculture is a big deal.

Climate alarmists argue that the world has been progressively warming in recent decades (due to anthropogenic greenhouse gas emissions) and that this has altered the normal rainfall pattern. Almost all major climate reports warn about the dangerous effects of climate change on rainfall in India.

However, the claims are false.

There is no “normal rainfall pattern” in India

The rainfall pattern in India has never been stable. There have been small epochal trends lasting a few decades, but their onset is unpredictable.

Though there is no “normal rainfall” pattern, current rainfall trends can be compared to decadal averages and means to see if, and how much, rainfall intensity has deviated from specific baselines.

Annual rainfall for 113 years (1901–2013) reveals no negative footprint of anthropogenic global warming (AGW). Departures from the 113-year average during the recent decades of AGW were not unprecedented. Similar departures (positive and negative) have occurred in the past too.

If anything, a revival of the monsoon has been recorded since 2002. Research published in Nature Climate Change revealed that summer monsoon rainfall (June–September) has increased in India at 1.34 mm per decade since 2002.

With the varied and complex climatic history stretching back through 100 years, it is difficult to predict the nature or timing of future interannual and decadal changes in monsoon rainfall.

Call it climate change or global warming, either way, it seems to have had no undesirable impact on India’s rainfall.

[A new graph was added on “Area Weighted Rainfall” as the original was not visible to some readers. Mod]

It is nog very useful to look for trends in highly erratic patterns me thinks.

Getting a trend in rainfall data requires Trick 1 from dodgy stats 101: a carefully selected short period of time. Its difficult to get a long term trend in data that cannot go negative. Both Cape Town and Perth Australia, posters children for fatal AGW-driven droughts, fail to show any long term trend when data back to the 19th century are examined. Here is Perth as an example:

That’s right, Alex V, if you want to look for nog you should look in eggs.

The 60-year pattern that appears in the All India Summer Monsoon rainfall between about 1828 and 1990. 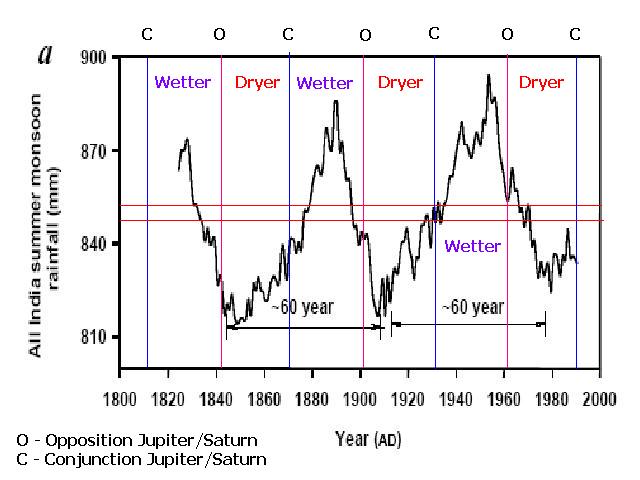 This graph appears in the upper right-hand corner of the following graph. This second graph shows that a similar 60-year pattern appears in the strength of the trade-winds in the tropical North Atlantic. 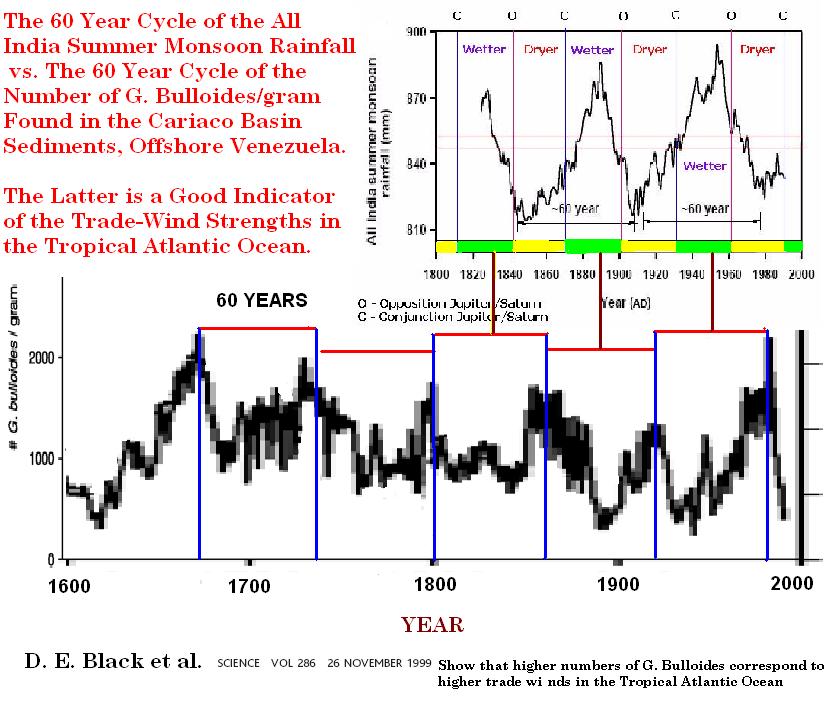 The Daily Telegraph on Tuesday had a splash headline ” Worst monsoon kills 110″ I would have thought that a poor monsoon would be the worst.

The author must be very brave, working for the University of East Anglia.

I don’t think he works there, but got a degree at UEA.

He’s associated with the Cornwall Alliance for the Stewardship of Creation.

Not a phrase I would use.
I’m getting older, so more easily do I fatigue when working.
And I’m growing weary of the climate scammers and their hustle to destroy my currently affordable electricity and travels.

Well that won’t get him any funding! (but at least he called it like it is!)

The “Annual Rainfall” figure is blank on my screen.

Studies on correlation and causation between the ISM and solar cycle, with papers from 2014 to 1989.

Associations between the 11‐year solar cycle and the Indian Summer Monsoon system:

Influence of the solar activity on the Indian Monsoon rainfall

Foraminiferal Evidences for 77-Year Cycles of Droughts in India and Its Possible Modulation by the Gleissberg Solar Cycle (requires registration to read for free):

The solar cycle and Indian rainfall:

Very interesting thank you Mr Jayaraj. Is there any correlation, whether lagged or otherwise, between monsoon rainfall and solar cycles/solar wind?

I was in central India in 1961, and the floods were impressive. The Narmuda river rose 60 feet, measured on the railway bridge. Brown water overflowed the nalahs by many feet. Interestingly, the main N-S road which passed our home (one tar sealed lane then) went through a low area about a mile up, and the causeway built by British engineers more than 100 years before was at least 6 feet above the flood; if I recall correctly, the railway bridge was had at least 20 feet leaway above the flood.

Few years ago I looked at Himalayan monsoons and found significant components with periods ( years)
– 4.5 (elNino)
– 6.3 ?
– 16.1 see below
– 21.8 Hale (solar magnetic field cycle)
– 28 ?
Any ideas where 6.3 or more importantly 28 year periodicities might come from?
In all my research of climate related data 16.1 years was only found in the Arctic temperature data, I have no idea if a direct link exist.
However there is 16.1 year periodicity in the Earth’s inner core differential rotation. One possibility is that the massive volumes of water from equatorial region of the Indian ocean are moved from low latitude to higher latitude thus affecting rate of rotation due to changes in the angular momentum, whereby greater inertia of heavy metallic inner core results in its differential rotation. The 16.1 year periodicity is also second most significant component in the Earth’s magnetic field variability spectrum, but this of course is directly related to the above mentioned differential rotation.

That graph looks a lot like the 500-year graph for California I saw a while back. Highly variable from year to year but no significant long-term trend. A drought for a moderate period followed by two years of heavy rains, then repeat.

It is going to excess in the next few decades. You can figure it out from my report. Click on my name.

Global land mean monthly precipitation anomaly since 1900 shows flat trend
Goto KNMI explorer
http://climexp.knmi.nl/selectfield_obs.cgi?someone@somewhere
Scroll down to third line under “precipitation” click on 1900-now anomalies: NCDC analysis (land)
Then back to top of column and click on “select field”
the next page allows filtering, but for all data just click “make time series” to plot the data
the resulting png plot is copied here

These climate alarmist have a very low view of human ingenuity. They seem to think man cannot adapt and are at the mercy of his environment.

To quote Professor Andy Pitman AO from a recent climate thing at the (very left) Sydney University recently. I was there-nearly fell off my chair scrambling for my note pad. Transcription below made for Lord Monckton, so please share it around-
“I’ll answer the first bit and this may not be what you expect to hear, but as far as the climate scientists know,there is no link between climate change and drought. Now that may not be what you read in the newspapers and sometimes hear commented, but there is no reason a priori why climate change should make the landscape more arid and if you look at the bureau pf meteorology data over the whole of the last 100 years, there’s no trend in the data, there’s no trend. There’s been a drying trend in the last 20 years but there’s been no drying trend in the last 100 years and that’s an expression of how variable the Australian rainfall climate is. There is in some areas and not in other regions. So the fundamental problem we have is we don’t understand what causes drought and much more interesting, is we don’t know what stops drought. Well, we know it’s rain, but we don’t know what lines up to create drought breaking rains and that’s an area of very active research.”

ta for that
guess hes retiring or has a good grip on something/one? to avoid being “ridded”

stuffed if I can see why we dont silveriodide bomb some clouds
n Make it bloody well rain!

For the SH [including RSA] I think the drought time is coming to an end now soon, according to my calculation. It is starting now in the NH
[click on my name to read my report on that]

Claim: California’s Rainy Season Starting Nearly A Month Later Than It Did 60 Years Ago

Something’s Rotten in D.C., and It Isn’t Those Rain Totals

If Precipitation Extremes Are Increasing, Why Aren’t Floods?

The Disappointing Nature Of Some Science Writing