What’s actually in the report 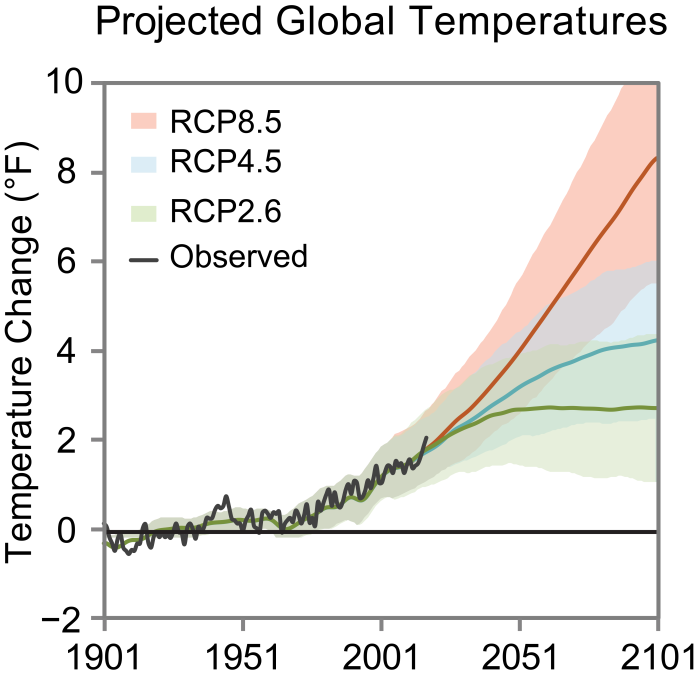 Figure 1.4 shows the projected changes in globally averaged temperature for a range of future pathways that vary from assuming strong continued dependence on fossil fuels in energy and transportation systems over the 21st century (the high scenario is Representative Concentration Pathway 8.5, or RCP8.5) to assuming major emissions reduction (the even lower scenario, RCP2.6). Chapter 4: Projections describes the future scenarios and the models of Earth’s climate system being used to quantify the impact of human choices and natural variability on future climate. These analyses also suggest that global surface temperature increases for the end of the 21st century are very likely to exceed 1.5°C (2.7°F) relative to the 1850–1900 average for all projections, with the exception of the lowest part of the uncertainty range for RCP2…

I downloaded HadCRUT4 and UAH 6.0 from our friends at Wood For Trees.  After converting to Fahrenheit and applying static shifts to match NCA4’s baseline, I overlaid the real data on the NCA4 image and projected UAH 6.0 to the end of this century. 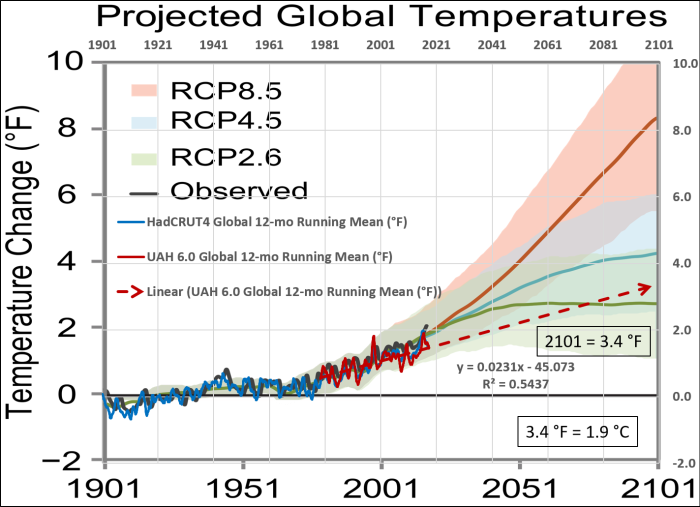 Looks like the forecast for 2100 is slightly warmer than RCP2.6.  RCP2.6 is a world in which atmospheric CO2 tops out at just over 400 ppmv and the world runs out of oil… 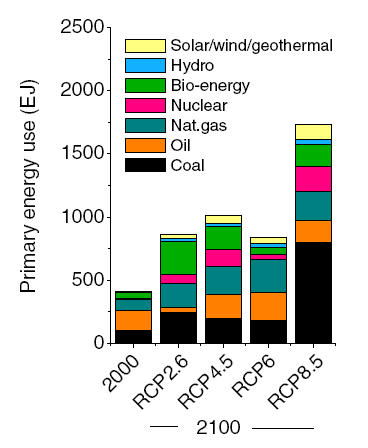 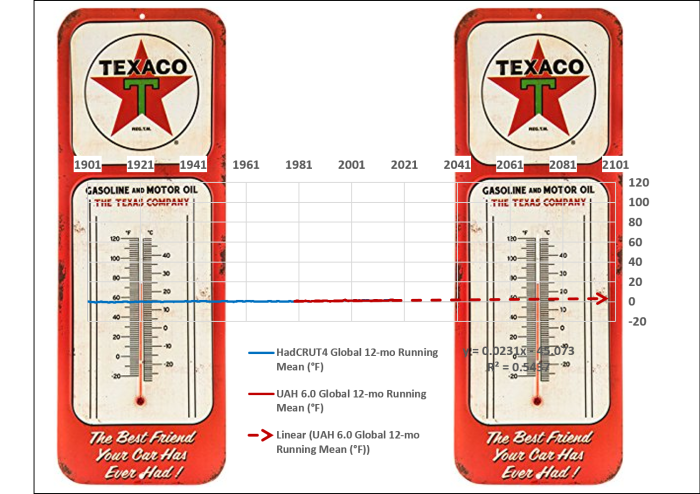 Volume II, Chapter 2 features this summary of what the climate would have done without Texaco…

Figure 5.  How they know Texaco is to blame.

This what they say about the image above…

Figure 2.1: Both human and natural factors influence Earth’s climate, but the long-term global warming trend observed over the past century can only be explained by the effect that human activities have had on the climate.

Sophisticated computer models of Earth’s climate system allow scientists to explore the effects of both natural and human factors. In all three panels of this figure, the black line shows the observed annual average global surface temperature for 1880–2017 as a difference from the average value for 1880–1910.

The top panel (a) shows the temperature changes simulated by a climate model when only natural factors (yellow line) are considered. The other lines show the individual contributions to the overall effect from observed changes in Earth’s orbit (brown line), the amount of incoming energy from the sun (purple line), and changes in emissions from volcanic eruptions (green line). Note that no long-term trend in globally averaged surface temperature over this time period would be expected from natural factors alone.10

The middle panel (b) shows the simulated changes in global temperature when considering only human influences (dark red line), including the contributions from emissions of greenhouse gases (purple line) and small particles (referred to as aerosols, brown line) as well as changes in ozone levels (orange line) and changes in land cover, including deforestation (green line). Changes in aerosols and land cover have had a net cooling effect in recent decades, while changes in near-surface ozone levels have had a small warming effect.18 These smaller effects are dominated by the large warming influence of greenhouse gases such as carbon dioxide and methane. Note that the net effect of human factors (dark red line) explains most of the long-term warming trend.

The bottom panel (c) shows the temperature change (orange line) simulated by a climate model when both human and natural influences are included. The result matches the observed temperature record closely, particularly since 1950, making the dominant role of human drivers plainly visible.

Researchers do not expect climate models to exactly reproduce the specific timing of actual weather events or short-term climate variations, but they do expect the models to capture how the whole climate system behaves over long periods of time. The simulated temperature lines represent the average values from a large number of simulation runs. The orange hatching represents uncertainty bands based on those simulations. For any given year, 95% of the simulations will lie inside the orange bands. Source: NASA GISS.

This is what I think of panel (a), “All Natural Influences”… 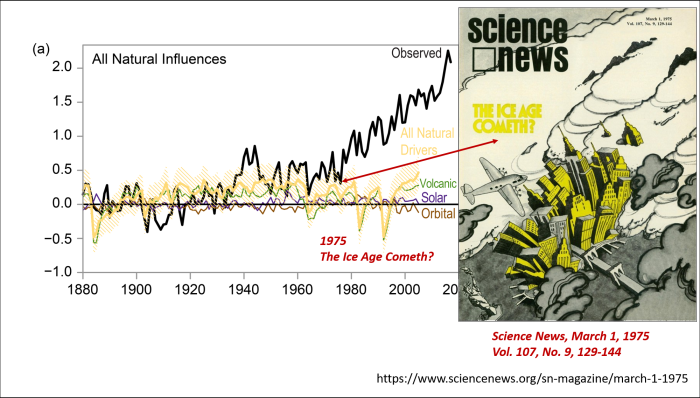 Figure 6.  You can trust your climate the the man who wears the star, the big, bright Texaco star!  Texaco and the rest of the Climate Wrecking Industry saved us from The Ice Age Cometh!

By BLOOMBERG November 24, 2018
The Trump administration just published a major report documenting the advance of climate change, weeks earlier than expected and on a day many Americans are occupied with family and holiday shopping. The news is predictably bad, but this time the tally comes with a pricetag—one significantly larger than you’ll find at the mall.

The report catalogs the observed damage and accelerating financial losses projected from a climate now unmoored from a 12,000-year period of relative stability. The result is that much of what humans have built, and many of the things they are building now, are unsuited to the world as it exists. And as time goes on, the added cost of living in that world could total hundreds of billions of dollars—annually.

The rest of the article was even stupider.

Apparently, these dire economic forecasts are based on RCP8.5 and research funded by Tom Steyer…

f you’re like me, you’re happy the White House released the latest version of the National Climate Assessment on Black Friday. Publishing the 1,700-page report the day after Thanksgiving saved me from unwanted dinner conversations about our planet’s impending climate doom.

But if your aunt calls you up this week spouting claims of mass deaths, global food shortages, economic destruction, and national security risks resulting from climate change, here’s what you need to know about this report.

One statistic that media outlets have seized upon is that the worst climate scenario could cost the U.S. 10 percent of its gross domestic product by 2100. The 10 percent loss projection is more than twice the percentage that was lost during the Great Recession.

The study, funded in part by climate warrior Tom Steyer’s organization, calculates these costs on the assumption that the world will be 15 degrees Fahrenheit warmer. That temperature projection is even higher than the worst-case scenario predicted by the United Nations Intergovernmental Panel on Climate Change. In other words, it is completely unrealistic.

2. It assumes the most extreme (and least likely)climate scenario.

The scary projections in the National Climate Assessment rely on a theoretical climate trajectory that is known as Representative Concentration Pathway 8.5. In estimating impacts on climate change, climatologists use four representative such trajectories to project different greenhouse gas concentrations.

To put it plainly, Representative Concentration Pathway 8.5 assumes a combination of bad factors that are not likely to all coincide. It assumes “the fastest population growth (a doubling of Earth’s population to 12 billion), the lowest rate of technology development, slow GDP growth, a massive increase in world poverty, plus high energy use and emissions.”

3. It cherry-picks science on extreme weather and misrepresents timelines and causality.

4. Energy taxes are a costly non-solution.

The National Climate Assessment stresses that this report “was created to inform policy-makers and makes no specific recommendations on how to remedy the problem.” Yet the takeaway was clear: The costs pf action (10 percent of America’s GDP) dwarf the costs of any climate policy.

The reality, however, is that policies endorsed to combat climate change would carry significant costs and would do nothing to mitigate warming, even if there were a looming catastrophe like the National Climate Association says.

Just last month, the Intergovernmental Panel on Climate Change proposed a carbon tax of between $135 and $5,500 by the year 2030. An energy tax of that magnitude would bankrupt families and businesses, and undoubtedly catapult the world into economic despair.

These policies would simply divert resources away from more valuable use, such as investing in more robust infrastructure to protect against natural disasters or investing in new technologies that make Representative Concentration Pathway 8.5 even more of an afterthought than it already should be.

The Steyer-funded study is not pay-walled and it’s a doozy!

Estimates of climate change damage are central to the design of climate policies. Here, we develop a flexible architecture for computing damages that integrates climate science, econometric analyses, and process models. We use this approach to construct spatially explicit, probabilistic, and empirically derived estimates of economic damage in the United States from climate change. The combined value of market and nonmarket damage across analyzed sectors—agriculture, crime, coastal storms, energy, human mortality, and labor—increases quadratically in global mean temperature, costing roughly 1.2% of gross domestic product per +1°C on average. Importantly, risk is distributed unequally across locations, generating a large transfer of value northward and westward that increases economic inequality. By the late 21st century, the poorest third of counties are projected to experience damages between 2 and 20% of county income (90% chance) under business-as-usual emissions (Representative Concentration Pathway 8.5).

They literally did refer to RCP8.5 as “business-as-usual emissions.”

Based on a realistic climate sensitivity (TCR = 1.5 K per doubling) and the simple projection of UAH 6.0 to the end of this century, we get about 1.5 to 1.9 °C of total warming by the end of this century.  According to Hsiang et al., 2017, that equates to about a 1% reduction in US GDP from 2080-2099, relative to what it would be without any additional warming…

Figure 7. Figure 5 from Hsiang et al., 2017.  Estimates of total direct economic damage from climate change.(A) Total direct damage to U.S. economy, summed across all assessed sectors, as a function of global mean temperature change. Dot-whisker markers as in Fig. 3. The black line is quadratic regression through all simulations (damage = 0.283 ΔGMST + 0.146 ΔGMST2); the shaded region is bounded by quantile regressions through the 5th and 95th percentiles. Alternative polynomial forms and statistical uncertainty are reported in fig. S14 and tables S16 and S17. (B) Contributions to median estimate of aggregate damage by impact category. (Coastal impacts do not scale with temperature.) (C) Probability distribution damage in each of 3143 U.S. counties as a fraction of county income, ordered by current county income. Dots, median; dark whiskers, inner 66% credible interval; light whiskers, inner 90%. (D) Distributions of GDP loss compared with direct damages when a CGE model is forced by direct damages each period. Black line, median (labeled); boxes, interquartile range; dots, outliers. Energy, Ag., Labor, and Mortality indicate comparisons when the model is forced by damages only in the specified sector and GDP losses are compared with direct damages in that sector under the same forcing. CGE mortality only affects GDP through lost earnings, but direct mortality damages in (A) to (C) account for nonmarket VSL. “All” indicates the ratio of total costs (excluding mortality for consistency) in complete simulations where all sectors in the CGE model are forced by direct damages simultaneously.

How much would you spend today to avert a 1% loss 80 years from now?  Dean Wormer has the answer: