It’s been a couple of weeks since Hurricane Florence made landfall as a Category 1 storm. The weakening from a Category 4 storm must’ve really tweaked alarmists.

NOTE:  Please understand that I am not attempting to make light of the losses in life and property, or other sufferings, associated with Hurricane Florence. This post is solely intended to provide a reference for those who would like to use real data to counter the typical alarmist nonsense normally spread during and after natural disasters like Florence…alarmist nonsense spread by the mainstream media, by enviro-profiteers, by brainwashed gullible persons, by activist climate scientists who wallow in government funding, and by politicians (Eek, it’s an election year!).

We all realize the sea surface temperatures in the North Atlantic near to the coast of the Carolinas were higher-than-normal. But, obviously, sea surface temperatures are not the only thing to dictate the strength of hurricanes.  This should have become blatantly obvious when Florence weakened significantly in its last few days over the North Atlantic, back to a category 1 storm, before making landfall.  According to Dr. Judith Curry’s discussion here, the weakening before landfall was caused by wind shear. Thank you, wind shear…and thank you, too, Judith.

Figure 2 is a time-series graph of the sea surface temperature anomalies for the full storm track of Florence, with the data for the three regions weighted and averaged as discussed above. The September 2018 anomaly was a not-so-alarming +0.26 deg C above the 1981 to 2010 average.

In other words, as the title of the post reads there was nothing unprecedented about the sea surface temperatures for Florence’s full storm track.  That value has been regularly achieved as far back as the 1940s and the late 1800s. 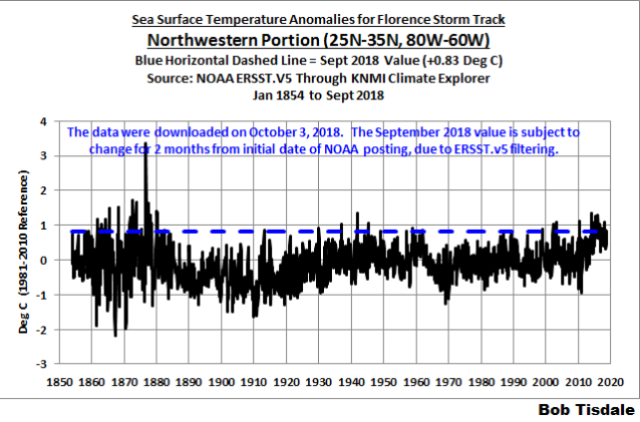 TRIVIA: WHAT DECADE SINCE 1900 HAD THE MOST HURRICANES MAKE LANDFALL IN THE CONTINENTAL UNITED STATES?

When I published my short story Dad, Is Climate Getting Worse in the United States?, I promised myself I would never present any of the graphs from it in a blog post. Well, I’m about to break that promise to myself so that I can answer the above question.  See Exhibit 02 below from that short story.

Exhibit 02 from Dad, Is Climate Getting Worse in the United States?

The 10-year period ending in 1942 had the highest 10-year average, of course. On a decade basis, basically, the 1930s had the highest number of hurricanes making landfall on the continental United States. And please notice, the recent 10-year averages are roughly half (and less than half) the peak value.  The source of the data is the “The Hurricane Research Division of the NOAA Atlantic Ocean Meteorological Laboratory (AOML), specifically the table with data titled “Continental United States Hurricane Impacts/Landfalls 1851–2017” at their website here [archived here].

Hmm, the 1930s also had the worst drought conditions across the contiguous U.S. and the highest high temperatures there as well, as also illustrated and discussed in Dad, Is Climate Getting Worse in the United States?

Yet some parties would like everyone to believe that climate is getting worse in the United States.  Ha ha ha ha ha!   And keep in mind the Great Depression was also taking place in the 1930s.  Oy!

As many of you know, this year I published 2 ebooks that are available through Amazon in Kindle format:

Don’t have a Kindle reader? No problem.  See the Get the free Kindle app webpage.

READ THEM FOR “FREE”?  Both of those Kindle ebooks are now available through Kindle Unlimited and Kindle Owners’ Lending Library, so if you subscribe to Kindle Unlimited or Amazon Prime, you can read the books at no additional cost.

To those of you who have purchased them or downloaded them, thank you very much. To those who haven’t, please do.  You might even learn something. I always learn stuff while preparing my books.