As North Korea’s president pledges to “denuclearize” the Korean peninsula, an international team of scientists is publishing the most detailed view yet of the site of the country’s latest and largest underground nuclear test on Sept. 3, 2017.

The new picture of how the explosion altered the mountain above the detonation highlights the importance of using satellite radar imaging, called SAR (synthetic aperture radar), in addition to seismic recordings to more precisely monitor the location and yield of nuclear tests in North Korea and around the world.

The researchers—Teng Wang, Qibin Shi, Shengji Wei and Sylvain Barbot from Nanyang Technological University in Singapore, Douglas Dreger and Roland Bürgmann from the University of California, Berkeley, Mehdi Nikkhoo from the German Research Centre for Geosciences in Potsdam, Mahdi Motagh from the Leibniz Universität Hannover, and Qi-Fu Chen from the Chinese Academy of Sciences in Beijing—will report their results online this week in advance of publication in the journal Science.

Fig. 1
Three-dimensional (3D) displacement associated with the 3 September 2017 North Korean Nuclear Test (NKNT 6).
(A) 3D displacements derived from radar imagery with arrows indicating horizontal, color indicating vertical motions spanning the explosion and ~1 week of additional deformation. The uncertainties are shown in fig. S4 and provided in data S1 with the displacements. Black outline derived from ALOS-2 coherence loss indicates the substantial surface disturbance and large displacement gradients caused by the explosion over an area of ~9 km2 (figs. S1 and S2). Thin gray lines are topographic contours at 100-m intervals. Red square in the upper right inset shows the location of Mt. Mantap. Red stars indicate the locations of NKNT 1-5 (1, 6, 9, 15, 37), among which NKNT 2-5 were all located within the NKNT-6 low-coherence region, NKNT 1 on 9 October 2006 was in a different location (5). Beach balls show locations and focal mechanisms of the Mw 5.24 and Mw 4.47 events on 3 September 2017. (B and C) 2D (horizontal along the profile and vertical) displacements along two profiles across the top of Mt Mantap from north to south, and from west to east respectively. The elevations along the vertical axis in (B) and (C) are on scale.

That explosion took place under Mt. Mantap at the Punggye-ri nuclear test site in the country’s north, rocking the area like a 5.2-magnitude earthquake. Based on seismic recordings from global and regional networks, and before-and-after radar measurements of the ground surface from Germany’s TerraSAR-X and Japan’s ALOS-2 radar imaging satellites, the team showed that the underground nuclear blast pushed the surface of Mt. Mantap outward by as much as 11 feet (3.5 meters) and left the mountain about 20 inches (0.5 meters) shorter.

By modelling the event on a computer, they were able to pinpoint the location of the explosion, directly under the mile-high summit, and its depth, between a quarter and a third of a mile (400-600 meters) below the peak.

They also located more precisely another seismic event, or aftershock, that occurred 8.5 minutes after the nuclear explosion, putting it some 2,300 feet (700 meters) south of the bomb blast. This is about halfway between the site of the nuclear detonation and an access tunnel entrance and may have been caused by the collapse of part of the tunnel or of a cavity remaining from a previous nuclear explosion.

“This is the first time the complete three-dimensional surface displacements associated with an underground nuclear test were imaged and presented to the public,” said lead author Teng Wang of the Earth Observatory of Singapore at Nanyang Technological University.

From Science Magazine, the paper: http://science.sciencemag.org/content/early/2018/05/09/science.aar7230.full

The rise, collapse, and compaction of Mt. Mantap from the 3 September 2017 North Korean nuclear test

Surveillance of clandestine nuclear tests relies on a global seismic network, but the potential of spaceborne monitoring has been underexploited. Here, we determined the complete surface displacement field of up to 3.5 m of divergent horizontal motion with 0.5 m of subsidence associated with North Korea’s largest underground nuclear test using satellite radar imagery. Combining insight from geodetic and seismological remote sensing, we found that the aftermath of the initial explosive deformation involved subsidence associated with sub-surface collapse and aseismic compaction of the damaged rocks of the test site. The explosive yield from the nuclear detonation with seismic modeling for 450m depth was between 120-304 kt of TNT equivalent. Our results demonstrate the capability of spaceborne remote sensing to help characterize large underground nuclear tests. 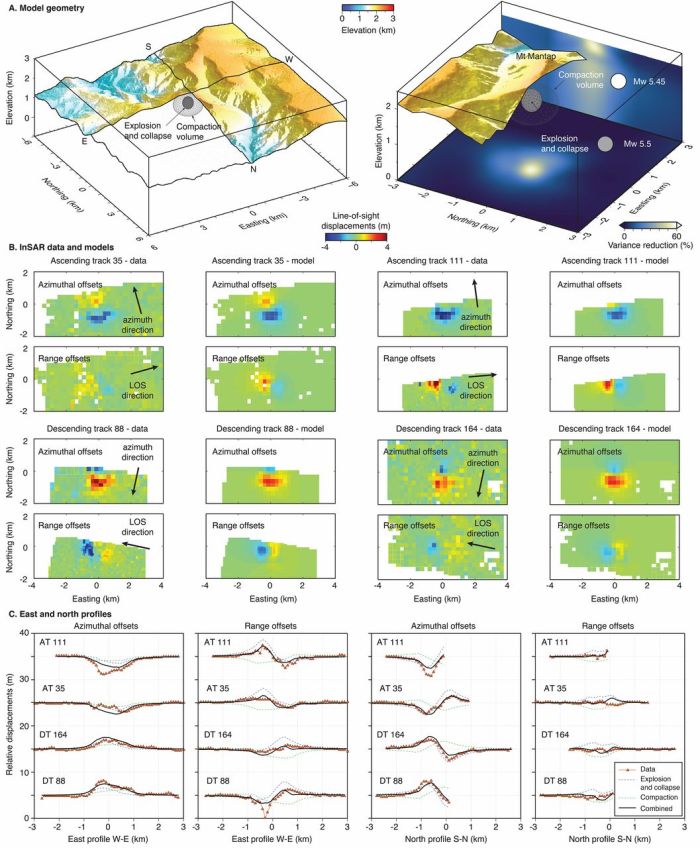 Fig. 2
Model geometry and fit to the observed surface displacements.
(A) Perspective view of the model with topography and variance reductions as a function of centroid position (both cross-sections are centered on the best fit location). We represent the first event, combining the explosion and immediate collapse, using a sphere of 300 m radius with a centroid located at a depth about 450 m below Mt Mantap. We model the aseismic subsidence detected with geodetic data about a week after the seismic events 1 and 2 with an ellipsoid of dimension 800 × 800 × 470 m semi-axes, centered at 100 m deeper than the explosive source. The isotropic components of the moment tensors are represented as beach balls. (B) The observed and simulated surface displacements. (C) The west-east and south-north profiles of the surface displacements from the SAR observations and the best-fitting models. The dashed profiles represent the contributions of the explosion/collapse (Event 1) and the subsequent aseismic compaction on the surface displacement. We ignore the deformation caused by Event 2.

Fig. 3
Analysis of seismic waves.
(A) Station map of broadband seismometers with four stations in (B) and (D) highlighted in red. The black and red stars are the epicenter location of the first and second event, respectively. (B) Moment tensor solutions for the first explosive (left) and the second implosive (right) event, with vertical component of two representative stations shown at the bottom. Both data and synthetics are filtered between 0.02 and 0.045 Hz. Station names are shown at the beginning of waveform pairs and distance (in km) and azimuth (in degree) are indicated below. (C) Grid search result (under L1 norm) for relocating the second event relative to the first event (black star). Marginal distribution for the epicentral position are plotted along the northing and easting axes. (D) Vertical component waveform comparison between the first (black) and the second (red) event at two representative stations, with the second event waveforms multiplied by -60. (E) Explosive yield with historical nuclear tests. The black dots and error bars show yields estimated based on the mean and standard deviation of tabulated moment within 95% of the best fitting solutions with depths of 300, 450 and 600 m respectively.

Combining the available space-borne geodetic and seismic records provided new insights into the mechanics of deformation surrounding North Korea’s sixth underground nuclear test, revealing the explosion, collapse, and subsequent compaction sequence (Fig. 4). The modeling of the geodetic observations reduces the epicentral and depth uncertainties that otherwise hinder the analysis of seismic waveforms. The derived horizontal location of the first event is important to relatively relocate the second event, which likely indicates the collapse of the tunnel system of the test site. The inclusion of geodetic data also helps resolving the aseismic deformation processes that may follow nuclear tests. Finally, our findings demonstrate the capability of monitoring shallow underground nuclear tests using remote-sensing observations and seismic sensors.

Fig. 4
Summary deformation scenario for the 3 September 2017 North Korea’s Nuclear test.
The unfolding of events includes the succession of (A) explosive, (B) collapse, and (D) compaction processes, with different associated surface displacements. The implosive source (C) may be shallow and only contribute localized surface displacements. The radar imagery reveals the deformation (arrows in (D)] resulting from the three processes.