EPA Administrator Scott Pruitt was one of the featured guests on Fox News Sunday yesterday.  Chris Wallace grilled him about President Trump’s decision to scrap Obama’s Clean Power Plan (CPP).  The interview mostly consisted of Wallace reading Obama Maladministration talking points about the CPP and demanding that Pruitt explain how they were going to “prevent those terrible things” without the CPP.

One of Chris Wallace’s mindbogglingly ignorant “gotcha” questions of struck a raw nerve:

WALLACE: A look at Nationals Park, where Washington’s finest have opening day tomorrow for the baseball season. But, there will be no presidential first pitch as the White House declined an invitation.

SCOTT PRUITT, EPA ADMINISTRATOR: Good morning, Chris. How are you?

When the Obama EPA announced its Clean Power Plan, it said that the reduction in carbon pollution would have the following health benefits. I want to put them up on the screen.

Without the Clean Power Plan, how are you going to prevent those terrible things?

PRUITT: Well, Chris, I think what’s important this past week is to recognize that the president is keeping his promise to the American people to rollback regulatory overreaches that have been occurring the last couple of years. And as you know, the Clean Power Plan is subject to a U.S. Supreme Court state. The steps have been taken by the EPA historically, they’ve equally been challenged several times with respective CO2 regulation. And each of those times the Supreme Court and courts have said that the power that has been used has been an overreach.

And so, the president is keeping his promise to deal with that overreach, Chris. It doesn’t mean that clean air and clean water is not going to be the focus in the future. We’re just going to do it right within the consistency of the framework that Congress has passed. Now, I think that’s very important to recognize.

WALLACE: But, sir, you’re giving me a regulatory answer, a political answer. You’re not giving me a health answer. I talked about 90,000 fewer asthma attacks, 300,000 fewer missed days in school and work.

The Obama Clean Power Plan called — said that carbon pollution from the power sector would be reduced by 30 percent. It would be one-third lower than it was in 2005.

Here’s what the American Lung Association says, “Half of all Americans now live in counties with unhealthy air.” You talk about all the regulatory overreach, but the question is, there are 166 million people living in unclean air and you are going to remove some of the pollution restrictions, which will make the air even worse.

PRUITT: Well, Chris, a couple things, we are actually pre-1994 levels with respect to our CO2 footprint. So, this country is doing far better than most across the globe. As you know, also since 1980, we’ve got a 65 percent reduction in those key air pollutants, SOx and NOx and particulate matter and ozone, while at the same time growing our economy.

How is it that the EPA can continue to get away with claiming that its latest rule du jour will prevent any asthma attacks?  It’s impossible to prove that something won’t happen in the future.  Furthermore, there is no evidence that any of the rules imposed under the authority of the Clean Air Act (CAA) have even “bent the curve” as it pertains to asthma.

If air pollution was a major driving factor in asthma, why did this happen?

All five of the EPA’s “criteria pollutants” have been drastically reduced since 1980, yet asthma continues to rise:

Figure 3. Ozone vs Asthma.  A four of the other criteria pollutants exhibit a similar relationship to asthma prevalence,  (IER)

If the drastic reduction in real air pollution hasn’t reversed the trend in asthma, how can the regulation of a non-pollutant, CO2 have any effect on asthma?   Unless the goal is to lower atmospheric CO2 to about 150 ppm and wipe out ragweed and other allergen-producing plants, the EPA’s Clean Power Plan, like all previous rules, will have no demonstrable effect on asthma.  Anyone who clicked the “ragweed” link is probably asking the same question I did, “Why do the alarmists claim that CO2 and AGW will kill all the good plants and enable ragweed to thrive”?

On a personal note: I have suffered from asthma since I was 4 years old and was hospitalized for about a week in 1963.  Since my onset of asthmatic symptoms occurred prior to Al Gore’s invention of climate change in 1988, I am confident that my asthma was not related to Gorebal Warming.  While, I would love to see asthma eradicated, I wouldn’t agree to pay 1¢ more per kWh of electricity or gallon of gasoline to fund this Quixotic war on climate change… Because I know it won’t have any effect on either the prevalence of asthma or the weather and I know it will cost trillions of dollars.

Why does the EPA continue to justify new rules and regulations on the basis of unverifiable claims of x cases of y malady averted?  Probably because they can’t offset the compliance costs with tangible benefits, particularly when they are forced to apply a realistic discount rate.

At What Cost is the Air Clean Enough?

Dr. Roy Spencer has a great example of the relationship between a clean environment and the cost of pollution reduction in his book, Climate Confusion: How Global Warming Hysteria Leads to Bad Science, Pandering Politicians and Misguided Policies That Hurt the Poor: 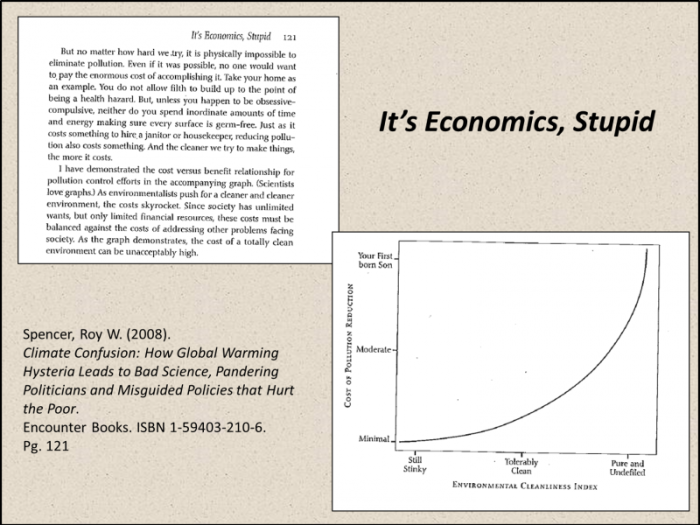 The CAA is a textbook example of a law which served its intended purpose… Unfortunately, it lacked any sort of sunset provision. Most pollutants are already at or near irreducible levels and almost all are well below the national standard; yet the EPA continues to ratchet down the standards, exponentially increasing compliance costs. 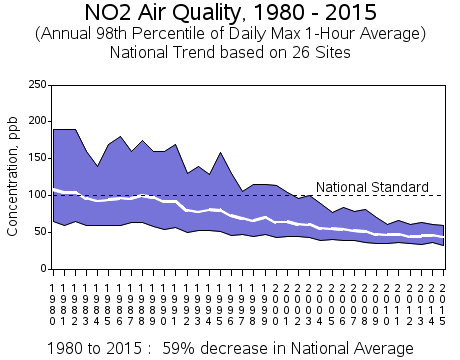 The U.S. EPA says, “the annual standard for PM2.5 is met whenever the 3 year average of the annual mean PM2.5 concentrations for designated monitoring sites in an area is less than or equal to 15.0 µg/m3.” The particulate matter pollution problem is not in the United States…

Ozone (O3) pollution has also been declining for 30 years: 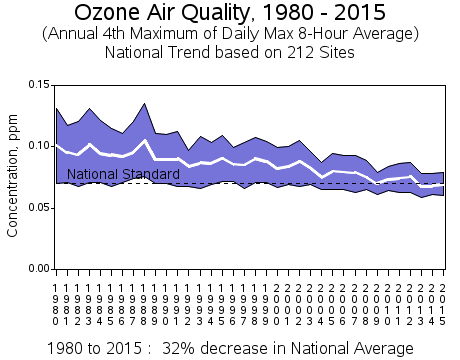 Note that the National Standard for surface level ozone (O3) is ~0.07 parts per million. Ozone isn’t a problem until it gets above 0.2 ppm…

Prolonged exposure of humans under occupational and experimental conditions produced no apparent ill effects. The threshold level at which nasal and throat irritation will result appears to be about 0.300 ppm.

The ozone level at which some sensitive species of plant life began to show signs of ozone effects.

The ozone level at which Los Angeles, California, declares its Smog Alert No. 1. Can cause nausea in some individuals. Extended exposure could cause lung edema (an abnormal accumulation of serous fluid in connective tissue or serous cavity). Enhances the susceptibility to respiratory infections.

Lead (Pb) is generally considered to be one of the most toxic pollutants. Lead pollution dates back at least to Roman times. It appears that lead pollution peaked in the mid-20th century and have been dropping like a lead weight since the 1960’s, totally ignoring the population “explosion” and the EPA (which did not commence its mischief until 1970). Lead levels are currently about where they were before the industrial revolution.

Pollution abatement follows a production (AKA diminishing returns) function. Each dollar spent removes less pollution than the previous dollar.  At what cost will the air be clean enough?

As usual, any and all sarcasm was probably intentional.