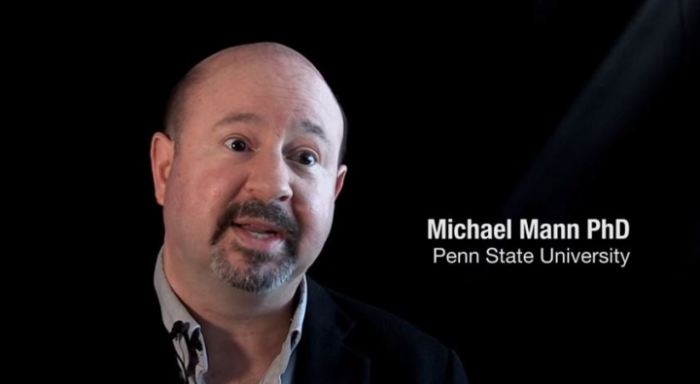 Michael Mann, inventor of the infamous climate “Hockey Stick”, has written an article to promote his book, and to promote the idea that scientists are rebelling against the new Trump administration.

Climate change denial is not dead

The era of climate change denial is over. Rejection of the unequivocal scientific evidence that carbon emissions from the burning of fossil fuels are warming the planet and changing our climate is no longer socially acceptable. Only the most fringe of politicians now disputes the overwhelming scientific consensus that climate change is real and human-caused, and they are largely ignored.

So why dignify the notion of climate change denial by writing about it?

Such was the criticism I received from many well-meaning fellow climate scientists last fall after I published my latest book, “The Madhouse Effect: How Climate Change Denial Is Threatening Our Planet, Destroying Our Politics, and Driving Us Crazy,” co-authored with Washington Post editorial cartoonist Tom Toles.

It is difficult to keep up with this dizzying ongoing assault on science.

Indeed, that assault was enough to motivate my fellow climate scientists and me to participate in a rally at the annual meeting of the largest Earth Science organization in the country, the American Geophysical Union, last December. And now there is a much larger plan afoot for a scientists’ march on Washington next month.

We scientists are, in general, a reticent lot who would much rather spend our time in the lab, out in the field, teaching and doing research. It is only the most unusual of circumstances that gets us marching in the streets. Trump’s assault on science is just such a circumstance. And we are seeing a rebellion continue to mount.

The obvious next step in this rebellion is mass resignation, to show the Trump administration that climate scientists cannot continue taking tainted money from a government whom they accuse of subverting science.

I look forward to reporting about all the heroic, principled climate scientists who rejected their secure academic tenure and fat government grants. No doubt Dr. Michael Mann will lead by example.