From the UNIVERSITY OF MARYLAND CENTER FOR ENVIRONMENTAL SCIENCE and the department of fish stories, comes this: 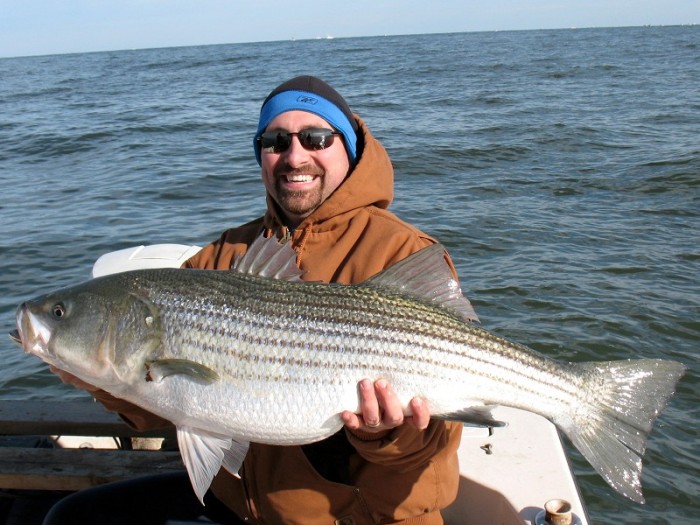 A large striped bass caught at the mouth of the Chesapeake Bay. Image: Wikimedia

SOLOMONS, MD (August 2, 2016) — Striped bass are known to have favorite summer swimming spots to which they return every year. They are creatures of habit. However, when a hurricane hits, everything can change very quickly. The water level rises rapidly. Runoff floods the river with sediment and chokes off the oxygen. Heavy rains create rushing currents and a sudden drop in water temperature. And the fish leave the area in a hurry. Scientists call it “evacuating” to better conditions.

Researchers from the University of Maryland Center for Environmental Science wanted to know the impact of severe storms on fish populations that have to make sudden and unexpected trips downstream, away from their preferred habitat, to more hospitable waters. Thanks to global warming, waterways that make up important habitat for fish are likely to experience an increased frequency of such extreme conditions.

“These events happen naturally, but having them occur more frequently may have a bigger impact on the fish,” said the study’s lead author Helen Bailey. “If you get more frequent storms during the year, it is possible you could interrupt their breeding and feeding in ways that impact their population.”

Bailey and Dave Secor tracked 22 striped bass in the Hudson River Estuary (which hosts one of the largest populations of this species) and New York Harbor during the Tropical Storms Irene and Lee in 2011. Occurring about a week apart, the significant weather events caused heavy rainfall, major flooding, and sudden influxes of fresh, cold water into the waterways.

The year before, during normal conditions, researchers had tagged the fish that lived there with small electronic transmitters that regularly pinged their every move. After the storms, they were able to compare the data to examine how their behavior was impacted by the extreme storm events.

“There are very few studies on this because it so hard to sample during these storm events. You can’t predict when they will happen and these can be hazardous conditions to work in,” said Bailey. “Telemetry data gave us the opportunity to do it.”

The researchers discovered that when the storms hit, most of the fish rapidly left the Hudson River and New York Harbor, moving south along the coast. A few remained in the harbor and were able to avoid being displaced. Others did a few exploratory trips later back to the harbor to check on conditions over the next few months and eventually returned up the river.

“It’s not unusual for fish to be leaving this area at this time of year,” said Bailey. “What was very unusual was that so many of them did it, they went so far south, and they did it so quickly.”

There were several changes to the behavior that the researchers didn’t expect. Most concerning, depending on when the storm events occurred, some of the striped bass that evacuated the areas did not immediately return, adopting new migration behaviors.

“The responses of fish species to extreme weather events will need to be considered when planning management strategies to ensure efforts are appropriately targeted to maintain key population segments and critical evacuation routes,” said Dave Secor, the study’s co-author at the University of Maryland Center for Environmental Science’s Chesapeake Biological Laboratory.

Located where the Patuxent River meets the Chesapeake Bay, the Chesapeake Biological Laboratory is the oldest publicly supported marine laboratory on the East Coast. Founded in 1925, it has long been a national leader in fisheries, environmental chemistry and toxicology, and ecosystem science and restoration ecology with a focus on whole ecosystem management and restoration. From developing successful fisheries management plans and breaking new ground in understanding how chemicals move between the atmosphere, sediments, and water to renowned work on nutrient dynamics and the food web, the lab is developing new scientific approaches to solving environmental management problems that face our world.

“Coastal evacuations by fish during extreme weather events” by Helen Bailey and David Secor of the University of Maryland Center for Environmental Science’s Chesapeake Biological Laboratory, was published online in Scientific Reports on July 26.