From the UNIVERSITY OF COLORADO AT BOULDER and the “I blame Edison” department. 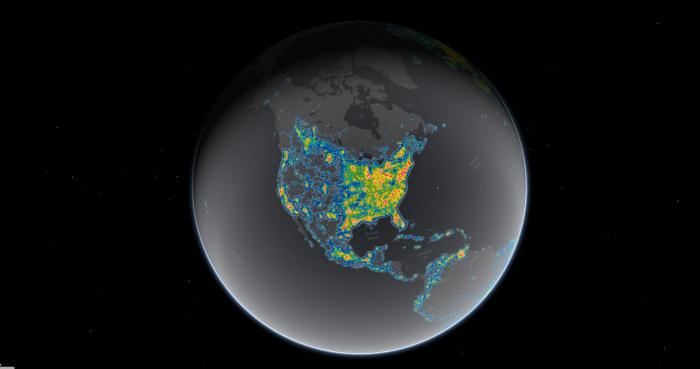 Light pollution now blots out the Milky Way for eight in 10 Americans. Bright areas in this map show where the sky glow from artificial lighting blots out the stars and constellations. An international team of researchers has released the new World Atlas of Artificial Sky Brightness, in a paper published in Science Advances today.
CREDIT
Falchi et al, Science Advances; Jakob Grothe/National Park Service, Matthew Price/CIRES/CU-Boulder.

The Milky Way, the brilliant river of stars that has dominated the night sky and human imaginations since time immemorial, is but a faded memory to one third of humanity and 80 percent of Americans, according to a new global atlas of light pollution produced by Italian and American scientists.

Light pollution is one of the most pervasive forms of environmental alteration. In most developed countries, the ubiquitous presence of artificial lights creates a luminous fog that swamps the stars and constellations of the night sky.

“We’ve got whole generations of people in the United States who have never seen the Milky Way,” said Chris Elvidge, a scientist with NOAA’s National Centers for Environmental Information in Boulder, Colorado. “It’s a big part of our connection to the cosmos — and it’s been lost.”

Elvidge, along with Kimberly Baugh of the Cooperative Institute for Research in Environmental Sciences at the University of Colorado Boulder, is part of a team that just updated a global atlas of light pollution published today in the journal Science Advances. Using high-resolution satellite data and precision sky brightness measurements, their study produced the most accurate assessment yet of the global impact of light pollution.

“I hope that this atlas will finally open the eyes of people to light pollution,” said lead author Fabio Falchi from the Light Pollution Science and Technology Institute in Italy.

Light pollution is most extensive in countries like Singapore, Italy and South Korea, while Canada and Australia retain the most dark sky. In western Europe, only small areas of night sky remain relatively undiminished, mainly in Scotland, Sweden and Norway. Despite the vast open spaces of the American west, almost half of the U.S. experiences light-polluted nights.

“In the U.S., some of our national parks are just about the last refuge of darkness – places like Yellowstone and the desert southwest,” said co-author Dan Duriscoe of the National Park Service. “We’re lucky to have a lot of public land that provides a buffer from large cities.”

Light pollution does more than rob humans of the opportunity to ponder the night sky. Unnatural light can confuse or expose wildlife like insects, birds and sea turtles, with often fatal consequences.

Fortunately, light pollution can be controlled by shielding lights to limit shine to the immediate area, reducing lighting to the minimum amount needed — or by simply turning them off.

In other news, North Korea still offers the Milky Way as the only free entertainment available at night, except in Pyongyang.