The apocalypse of an alleged climate change shares many of Jones’ cult-like qualities. 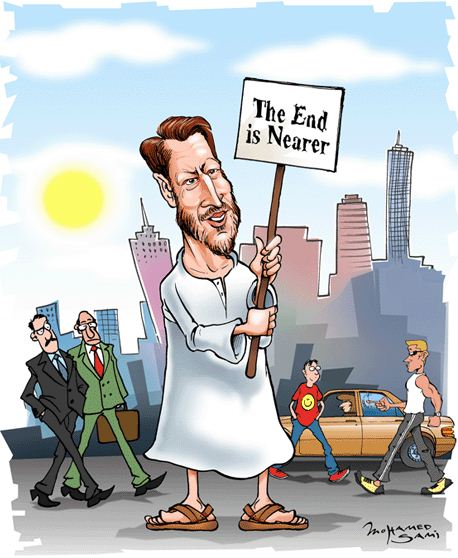 Jim Jones, the People’s Temple leader, led over 900 persons to commit suicide 32 years ago. Jones was charismatic and knowledgeable of both Scriptures and human behavior.

After the mass murder/suicide and the murder of U.S. Congressman, Leo Ryan, Jones and his followers were on the news every day for weeks. Jones, who built his cult around a “doomsday” scenario — convinced his followers that the world was past due for an apocalyptic ending very soon.

The apocalypse of an alleged climate change shares many of Jones’ cult-like qualities.

There are other similar traits, but here are four:

1. Climate doomsayers believe they possess truths about the past, present and future and their truths cannot be disputed by anyone.

2. Doomsayers refuse to debate their belief. They call their dogma “settled science” and attack any critics that dare to whisper in the dark.

3. Just like a cult, doomsayers has a formal doctrine-setting body — not unlike the Jones’ circle of advisors. The reports by the “ruling” body are thought to be the main source of authority and the texts of the Intergovernmental Panel on Climate Change are quoted as unholy scripture.

4. Staying with the Jonestown analogy, the climate change alarmists have created mythologies intentionally built on lies and half-truths. The fallacy can be ascribed as an appeal to everyday experiences, giving the listener some sense of truth-based teaching to mix with the soup of confusion.

Just as Jones and his small leadership group built lies on a foundation of lies and misinformation, the “sky-is-falling-crowd” spreads hoaxes to support their form of theology.

There was record sea ice in Antartica. In truth, a global warming expeditionary ship got stuck in the ice. Artic sea has been making a nice comeback, and the Great Lakes had record ice with only three ice-free months. If it were the hottest year, the ice should be melting.

The 2014/2015 winter saw record snowfall across the country. It wasn’t that long ago that scientists said that global warming would make the snow disappear, and children wouldn’t have any idea what snow is.

Al Gore and company predicted that oceans would rise twenty-feet by 2100. So far the oceans are on track to lift by 12-inches. Many tidal gauges are showing no rise in sea level and practically none show any increase over the past two decades.

Polar Bears are thriving. If this had been the hottest year on record, the Polar Bears would be in danger of disappearing.

When the moose population in Minnesota dropped observers were quick to blame global warming. Then a study was completed which found it was wolves that were killing the moose.

Nature generates much more CO2 than humans. In 2014, [NASA] launched a satellite that measures CO2 levels globally. The assumption was that most of the CO2 would come from the over-industrialized northern hemisphere. They were surprised to learn it was coming from the rainforests of South America as well as Africa and China.

9. It’s Not the Warmest Year

Looking at the satellite data, it has not been the warmest year ever. The figures show there has been no global warming for almost two-decades. Continuing to use the ground weather station data which is influenced by the Urban Heat Island effect provides the reason for scientists calling it the warmest year on record.

Look at the lifestyles of those who preach global warming. If the main purveyors of global warming believed their propaganda, they would modify their lifestyle. They all own multiple large homes, yachts and private jets. Some individuals, such as Al Gore, profit from Carbon Taxes and other “green energy” laws.

Climate change is a scientific issue. Rejoinders to climate change are policy matters. Lying — or fabricating hoaxes — about science and policy are typically accepted.

Each side of the debate has stayed busy pointing accusatory fingers at their antagonists and yelling fraud. Fraud about scientific methods, data, interpretation of data and so on. So far charges of fraud for monetary gain has been few and far between.

Despite the length of time that climate change has been debated, there have been zero — zero — instances of individuals being successfully indicted on fraud charges dealing specifically with climate change.

Only one individual, a climate-change guru with the Environmental Protection Agency, has been charged with lying and fraud. Those charges weren’t even about his work at the EPA, but rather lies about being on the CIA payroll.

John Beale will spend 30 months in federal prison for bilking the EPA out of over $1 million in salary and other benefits while claiming to be “deep undercover” for the Central Intelligence Agency in Pakistan.

That may be starting to change.

As the science of climate change begins its fourth decade, some businesses and individuals are caught up in more than just perpetuating hoaxes and are being brought to task for lying and fraud.

Exxon may be in trouble over lying about climate change. If Exxon Mobile knowingly funded misleading research as a part of a plan to convince American voters, their lie goes beyond policy statements and morphs into a business decision.

Prosecutors are after Exxon for lying to people who might not have bought gasoline if they knew the true story behind climate change. If Exxon Mobile began disclosing the business risks of climate change when it understood them will be a focus of the New York case currently underway.

The company has begun disclosing potential environmental risks recently, but whether those disclosers are sufficient is a matter of public debate and maybe a centerpiece for the trial.

In 2009, climate change alarmists scrambled to save face after hackers stole hundreds of emails from a British university and released them online.

Pirated from the Climatic Research Unit of the University of East Anglia, the documents purported to reveal researchers were engaging in fraudulent reporting of data to favor their own climate change agenda. As a matter of fact, fraud is a Federal offense punishable by long prison time.

The good thing is that false scientists, and their alarmism, will be countered now with their own words. Reliable researchers are still compiling the information for a publication that could shake the nation’s foundation on climate change.

A group of 20 university professors want to get the federal government to prosecute climate change doubters. The group posted a letter to the White House in September and matched those who are doubtful concerning man-made global warming to the tobacco industry.

If corporations in the fossil fuel industry and their supporters are guilty of the misdeeds that are becoming apparent as in the Exxon case, it is important that the misdeeds be stopped so that America can get on with the important business of finding the truth about climate change.