If you thought Part 1 was a doozy, “you ain’t seen nothing yet”…

Outfitting its biggest supertanker to measure the ocean’s absorption of carbon dioxide was a crown jewel in Exxon’s research program.

In 1981, 12-year-old Laura Shaw won her seventh-grade science fair at the Solomon Schechter Day School in Cranford, N.J. with a project on the greenhouse effect.

For her experiment, Laura used two souvenir miniatures of the Washington Monument, each with a thermometer attached to one side. She placed them in glass bowls and covered one with plastic wrap – her model of how a blanket of carbon dioxide traps the reflected heat of the sun and warms the Earth. When she turned a lamp on them, the thermometer in the plastic-covered bowl showed a higher temperature than the one in the uncovered bowl.

If Laura and her two younger siblings were unusually well-versed in the emerging science of the greenhouse effect, as global warming was known, it was because their father, Henry Shaw, had been busily tracking it for Exxon Corporation.

Henry Shaw was part of an accomplished group at Exxon tasked with studying the greenhouse effect. In the mid-70s, documents show that Shaw was responsible for seeking out new projects that were “of national significance,” and that could win federal funding. Others included Edward E. David, Jr., a former science advisor to President Richard Nixon, and James F. Black, who worked on hydrogen bomb research at Oak Ridge National Laboratory in the 1950s.

Black, who died in 1988, was among the first Exxon scientists to become acquainted with the greenhouse effect. Esso, as Exxon was known when he started, allowed him to pursue personal scientific interests. Black was fascinated by the idea of intentionally modifying weather to improve agriculture in arid countries, said his daughter, Claudia Black-Kalinsky.

“He believed that big science could save the world,” she said. In the early 1960s, Black helped draft a National Academy of Sciences report on weather and climate modification. Published in 1966, it said the buildup of carbon dioxide in the atmosphere “agrees quite well with the rate of its production by man’s consumption of fossil fuels.”

In the same period, a report for President Lyndon Johnson from the President’s Science Advisory Council in 1965 said the burning of fossil fuels “may be sufficient to produce measurable and perhaps marked changes in climate” by the year 2000.

By 1977, Black had become a top technical expert at Exxon Research & Engineering, a research hub based in Linden, N.J., and a science advisor to Exxon’s top management.  That year he made a presentation to the company’s leading executives warning that carbon dioxide accumulating in the upper atmosphere would warm the planet and if the CO2 concentration continued to rise, it could harm the environment and humankind.

Firstly, the Earth’s atmosphere is not air in a jar.

Secondly, the Black presentation was dated in 1978.

Thirdly, the Black presentation was just another survey of government and academic publications on the so-called greenhouse effect. 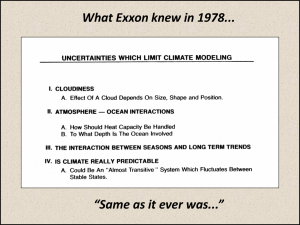 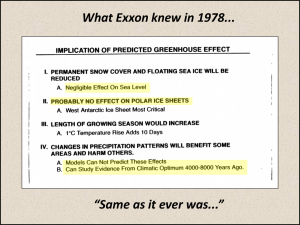 In 1978, Exxon knew that the effects on sea level and the polar ice caps would likely be negligible, models were useless and more effort should be directed at paleoclimatology. 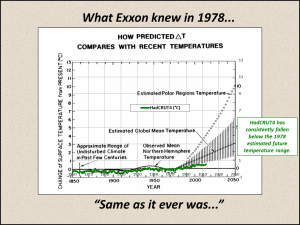 In 1978, Exxon knew that the models were useless.

Exxon’s enthusiasm for the project flagged in the early ’80s when federal funds fell through. Exxon Research cancelled the tanker project in 1982, but not before Garvey, Shaw and other company engineers published an initial paper in a highly specialized journal on the project’s methodology.

“We were anxious to get the word out that we were doing this study,” Garvey said of the paper, which did not reach sweeping conclusions. “The paper was the first of what we hoped to be many papers from the work,” he said in a recent email. But the other publications never materialized.

98 thoughts on “What did ExxonMobil Know and when did they know it? (Part Deux, "Same as it ever was.")”