From the UNIVERSITY OF MIAMI ROSENSTIEL SCHOOL OF MARINE & ATMOSPHERIC SCIENCE 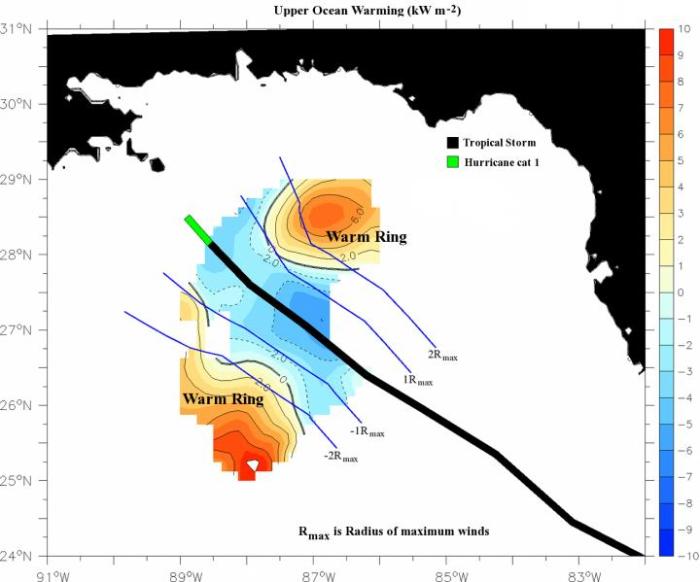 The figure depicts the upper ocean warming (in red color) observed over the warm rings during the intensification of Isaac. CREDIT Benjamin Jaimes

MIAMI – As tropical storm Isaac was gaining momentum toward the Mississippi River in August 2012, University of Miami (UM) researchers were dropping instruments from the sky above to study the ocean conditions beneath the storm. The newly published study showed how a downwelling of warm waters deepened the storm’s fuel tank for a rapid intensification toward hurricane status. The results also revealed how hurricane-generated currents and ocean eddies can transport oil and other pollutants to coastal regions.

Tropical storms obtain their energy from the ocean waters below. As a storm moves across the Gulf of Mexico, it may interact with an upwelling of cooler waters from the deeper ocean or, in the case of Isaac, a downwelling inside rings of warm water that separated from a warm-water current, called the Loop Current, that moves through the Gulf of Mexico to join with the Gulf Stream along the U.S. East Coast. As the storm moves forward, ocean temperatures are fueling the storm’s intensity.

UM Rosenstiel School of Marine and Atmospheric Science researchers, in collaboration with NOAA’s Atlantic Oceanographic and Meteorological Laboratory, deployed a total of 376 airborne sensors during six NOAA hurricane hunter aircraft flights conducted before, during, and after the passage of Isaac over the eastern Gulf of Mexico. The researchers observed a predominant downwelling of water inside these warm-water rings, or eddies, from the Loop Current, which caused its intensification from a tropical storm to a category 1 hurricane just prior to landfall.

“These results underscore the need for forecast models to include upwelling-downwelling responses to improve intensity forecasting and current transport,” said Benjamin Jaimes, an assistant scientist at the UM Rosenstiel School.

“Isaac moved over the region of the Deepwater Horizon oil spill where we observed both upwelling and downwelling processes that can re-suspend hydrocarbons lying on the seafloor,” said Nick Shay, professor of ocean sciences at the UM Rosenstiel School. “This may have resulted in tar balls being deposited on beaches by hurricane-generated currents.”

Tropical storm Isaac gradually intensified in the Gulf of Mexico to reach category 1 hurricane status as an 80 mph (130 km/h) storm, making landfall along the coast of Louisiana. The storm was estimated to have caused $2.39 billion in damage along its track.

The study, titled “Enhanced Wind-Driven Downwelling Flow in Warm Oceanic Eddy Features during the Intensification of Tropical Cyclone Isaac (2012): Observations and Theory,” was published in the June 2015 issue of the Journal of Physical Oceanography. The study’s co-authors include: Benjamin Jaimes and Lynn “Nick” Shay of the UM Rosenstiel School of Marine and Atmospheric Science’s Department of Ocean Sciences. BP/Gulf of Mexico Research Initiative to the Deep-C consortium at Florida State University supported the research.