Some days you just have to wonder about the sanity of environmentalists, today is one of those days. The photo below, Twittered by PBS station KQED in San Francisco, would be considered “not safe for work” not only just for the content, but for the facts these lunatics used a child to further their goal. Use of children by unhinged environmentalists in protests is something we are seeing more and more of these days, such as we recently saw in Canada when Ezra Levant  was asked by a parent to interview their child holding a sign. The parent then went on an online rant about it.

As for Berkeley, the Daily Caller writes:

Activists at the University of California at Berkeley got naked on Saturday to show their love for nearby trees that authorities are planning to cut own.

About 50 people showed up at a grove of eucalyptus trees on the campus of UC-Berkeley, stripped off their clothes, and began to intimately interact with the trees in the grove for the benefit of photographer Jack Gescheidt.The nudity was organized by Gescheidt as part of his Tree Spirit Project, an effort to create fine art photographs by, well, taking pictures of naked people while they cavort about in nature. The project’s website describes it as an attempt to “raise awareness of the critical role trees play in our lives, both globally and pesonally [sic].”

Gotta love the grandma type who didn’t think getting naked was such a good idea, but hugged the tree anyway. What these clueless enviros seem to miss, is that eucalyptus trees are non-native to California, and are considered invasive:

Since the 1850s,Californians had assisted a continuous introduction of eucalypts punctuated by two frenzied periods — one in the 1870s,the other from 1907 to 1913.Planters believed variously that eucalypts would provide fuel,improve the weather,boost farm productivity,defeat malaria,preserve watersheds,and thwart a looming timber famine. First and foremost,however,Californians planted the trees to domesticate and beautify the landscape,to make it more green.

California has been trying to get rid of them for years, due to their extreme fire hazard which ironically, KQED has also reported on: 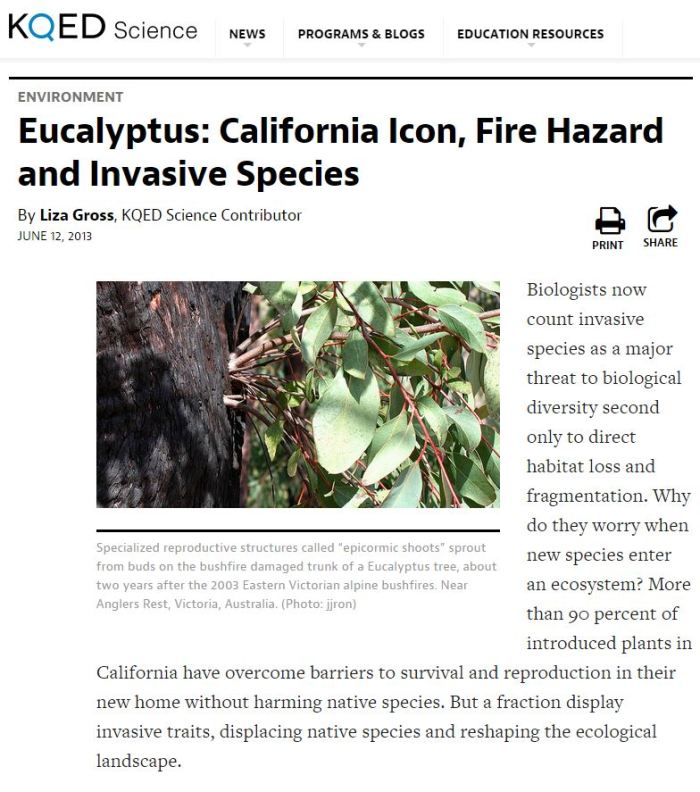 230 thoughts on “Friday Funny – 'tree hugging' taken to the extreme”