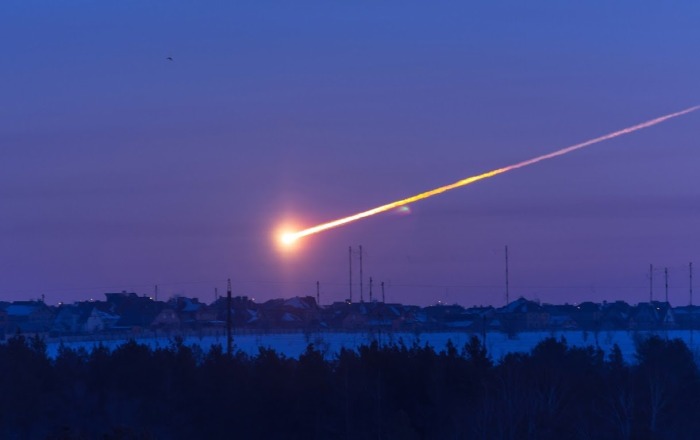 The Chelyabinsk meteor, possibly caused by a near Earth Asteroid

In 2013, NASA decided to take time out from creating spectacularly useless climate models, and reactivated their Near-Earth Object Wide-field Survey Explorer programme. The result is moderately terrifying – 8 previously unknown near Earth asteroids with catastrophic impact potential have been discovered, along with a host of smaller bodies which have the potential to wipe out a city.

According to The Register;

In December 2013, NASA re-activated the Near-Earth Object Wide-field Survey Explorer (NEOWISE) and in the twelve months since the project discovered three new comets and 40 previously-unknown near-earth objects, eight of which have Earth-bonking potential.

“WISE was launched into a low-Earth orbit in December 2009, and surveyed the full sky in four infrared wavelength bands (3.4, 4.6, 12 and 22 µm) with a 40 cm (16 in) diameter infrared telescope until the frozen hydrogen cooling the telescope was depleted in September 2010. Throughout this time, NEOWISE searched the WISE data for moving objects. Starting in October 2010, the mission was renamed NEOWISE, and the survey continued for an additional four months using the two shortest wavelength detectors. The spacecraft was placed into hibernation in February 2011, after completing its search of the inner solar system.

Recently, NEOWISE has been brought out of hibernation to learn more about the population of near-Earth objects and comets that could pose an impact hazard to the Earth. A three-year survey in the 3.4 and 4.6 µm infrared bands began in December 2013 in which NEOWISE will rapidly characterize near-Earth objects (NEOs) and obtain accurate measurements of their diameters and albedos (how much light an object reflects). NEOWISE is equally sensitive to both light-colored asteroids and the optically dark objects that are difficult for ground-based observers to discover and characterize. Just six days after the restart of the survey, NEOWISE discovered its first potentially hazardous near-Earth asteroid, 2013 YP139.

The JPL data table is a little tricky to read, but if I’ve understood it correctly, you take the “H” value (absolute magnitude – a measure of “brightness”) from the asteroid table http://www.minorplanetcenter.net/iau/lists/Dangerous.html , and look up that value in the diameter conversion chart, to get a range of possible diameters http://www.minorplanetcenter.net/iau/lists/Sizes.html . The diameter estimate is a range, because the size of the asteroid is not the only factor which affects the magnitude / brightness of the object.

To put this into perspective, the Chelyabinsk meteor which caused a 500 kiloton explosion over Russia in 2013 was estimated to be around 20 metres in diameter. http://en.wikipedia.org/wiki/Chelyabinsk_meteor A 300 metre object has the potential to cause (300 ^ 3 / 20 ^ 3) * 500 kilotons = 1.6 Gigaton explosion. An explosion of this magnitude, especially an ocean strike, could create gigantic Tsunamis, and would severely disrupt the global climate for several years, possibly longer.

Its nice to know that NASA occasionally takes a break from climate bothering, long enough to do something space related, but I’m mildly horrified that a project this important appears to be so far down the list of priorities, that the project was mothballed for a year while the survey satellite stood waiting for a refuel. Granted that a major Asteroid strike is a low probability event, but the consequences are potentially catastrophic – a big ocean strike could kill millions, maybe even billions of people.

As the Chelyabinsk wakeup call demonstrated, the risk of a damaging meteor impact is not a possibility which should be neglected.

Addendum- For the record, there are currently 1533 potentially hazardous near Earth Asteroids -Anthony