Chris deFrietas sends word of a new paper, that drops the trend of the New Zealand temperature record (NZTR) to 0.28C per century, down from ~0.9C per century. 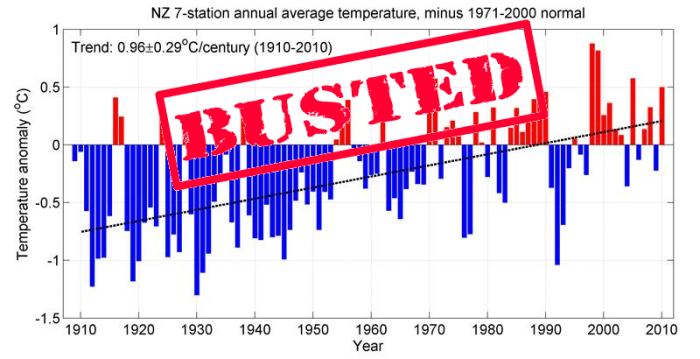 This past week, a paper on the NZTR was accepted by the journal  Environmental Modeling & Assessment. It was originally submitted in 2013!

This demonstrates some of the colossal peer-review hurdles that had to be overcome by climate skeptics  in getting a paper published that refutes the national temperature record produced by “official” government source National Institute of Water and Atmospheric Research (NIWA) as seen in the graph above and sourced here.

The mere fact of acceptance attests to a fundamental shift in scientific attitudes to climate change, but expect strident opposition to this paper.

The authors present first a concise observational history of the NZTR, remarking that the established national record was a product of early methodology, then reconstruct an homogenised dataset using the peer-reviewed adjustment standards of Rhoades &amp; Salinger, 1993 (RS93).

Detecting trends in climate is important in assessments of global change based on regional long-term data. Equally important is the reliability of the results that are widely used as a major input for a large number of societal design and planning purposes. New Zealand provides a rare long temperature time series in the Southern Hemisphere, and it is one of the longest continuous climate series available in the Southern Hemisphere Pacific. It is therefore important that this temperature dataset meets the highest quality control standards. New Zealand’s national record for the period 1909 to 2009 is analysed and the data homogenized. Current New Zealand century-long climatology based on 1981 methods produces a trend of 0.91 °C per century. Our analysis, which uses updated measurement techniques and corrects for shelter-contaminated data, produces a trend of 0.28 °C per century.