Now that the UAH satellite data are available, we can update the monthly Global Warming Prediction Index, a devastatingly simple measure of how well (or badly) the IPCC’s official predictions of global warming are doing.

However, the trend on the mean of the monthly RSS and UAH satellite lower-troposphere temperature anomalies is, if anything, falling, leading to an over-prediction by the IPCC of 0.17 Cº – a sixth of a Celsius degree – in the 111 months January 2005 to March 2014.

The models’ overshoot over 9 years 3 months is equivalent to more than 1.8 Cº per century.

Though the IPCC has finally realized that the models are unreliable as predictors of global temperature change, and has slashed its 30-year projection from 0.7 [ 0.4, 1.0] Cº in the pre-final draft of the Fifth Assessment Report to 0.5 [0.3, 0.7] Cº in the published final version, it has not cut its centennial-scale prediction, an implausibly hefty 3.7 Cº on business as usual (4.5 Cº if you are Sir David King, 11 Cº and a 10% probability of the Earth not surviving the 21st century if you are Lord Stern).

It is also interesting to compare the IPCC’s original global-warming predictions in the 1990 First Assessment Report with what has happened since. At that time, the IPCC said:

“Based on current model results, we predict [semantic bores, please note the IPCC uses the word “predict”, and, if you don’t like it, whine to ipcc.ch, not in comments here]:

Ø “under the IPCC Business-as-Usual (Scenario A) emissions of greenhouse gases, a rate of increase of global mean temperature during the next century of about 0.3°C per decade (with an uncertainty range of 0.2 C° to 0.5 C° per decade). This is greater than that seen over the past 10,000 years. This will result in a likely increase in global mean temperature of about 1 C° above the present value by 2025 and 3 Cº before the end of the next century. The rise will not be steady because of the influence of other factors.”

The IPCC’s best-guess near-term warming prediction in 1990 was equivalent to 2.78 Cº per century.

Real-world temperature change in the 291 months since January 1990 has been spectacularly below what was predicted. There has been just 0.34 Cº global warming, equivalent to a mere 1.39 Cº per century. The IPCC’s overshoot since 1990 amounts to another 0.34 Cº, or more than a third of a degree in 24 years 3 months, equivalent to 1.39 Cº per century. It predicted double the warming that has actually occurred. 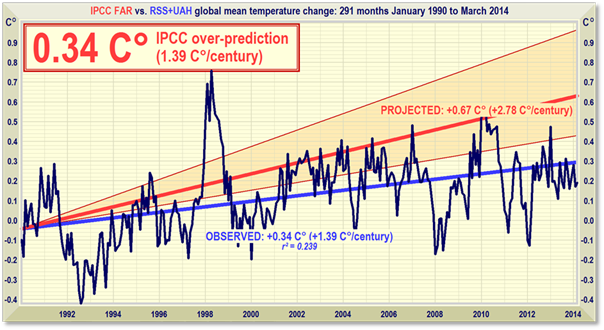 Once again, the IPCC’s interval of predictions for global temperature change since 1990 are shown as an orange region. The lower and upper bounds for its 1990 near-term warming estimate were 30% below and 50% above its central estimate, equivalent to 1.94 and 4.17 Cº per century respectively. The real-world outturn, equivalent to just 1.39 Cº per century, is appreciably below the lower bound of the IPCC’s very wide prediction interval.

In 1990 the IPCC’s “Executive Summary” raised the question “how much confidence do we have in our predictions?” It pointed out that there were many uncertainties (clouds, oceans, etc.), but concluded:

“Nevertheless, … we have substantial confidence that models can predict at least the broad-scale features of climate change. … There are similarities between results from the coupled models using simple representations of the ocean and those using more sophisticated descriptions, and our understanding of such differences as do occur gives us some confidence in the results.”

One look at the graph of projection against outturn since 1990 reveals that the IPCC has proven startlingly incapable of predicting the “broad-scale feature” central to the debate about greenhouse gases – the change in global temperature itself.

Here is a question that the legacy media should be addressing to IPCC director Pachauri, if they can distract him from authoring fourteenth-rate bodice-ripping pot-boilers for long enough.

Given global temperature rising for almost 25 years at half the central rate predicted by the IPCC in 1990, given no global warming at all for half the RSS satellite record, and given only 64 (or 0.5%) of 11,944 scientific abstracts published since 1991 stating that most of the global warming since 1950 was manmade, on what legitimate scientific or other rational basis did the IPCC recently increase from 90% to 95-99% its “confidence” that recent warming was mostly manmade? Answer me that.

174 thoughts on “The Great Credibility Gap yawns ever wider”