Note: Steve McIntyre’s Climate Audit blog is currently offline, he’s asked me to post this on his behalf – Anthony

A Light On Upstairs? The letter concludes by saying:

My apologies if the quick response that I sent to

Andy Revkin and several other journalists, including the

suggestion that it was a tempest inside somebody’s

teapot dome, and that perhaps a light was not on

upstairs, was immoderate. It was not ad hominem, though.

hominem remark and one that is highly inappropriate for a

federal civil servant. I have a number of comments about

other aspects of the letter.

Recently it was realized that the monthly

more-or-less-automatic updates of our global temperature

the analysis method (originally published in our 1981

we included improvements that NOAA had made in station

records in the U.S., their corrections being based

mainly on station-by-station information about station

movement, change of time-of-day at which max-min are

Unfortunately, we didn’t realize that these

corrections would not continue to be readily available

in the near-real-time data streams. The same stations

are in the GHCN (Global Historical Climatology Network)

data stream, however, and thus what our analysis picked

up in subsequent years was station data without the NOAA

with the NOAA-corrected records for earlier years caused

jumps in 2001 in the records at those stations, some up,

The first sentence “it was realized” certainly makes it

position not taken in the webpage itself.) Moving on, Hansen

says that the USHCN “corrections would not continue to be

readily available in the near-real-time data streams”. If

GISS is using USHCN adjusted data (as appears to be case

from the description in Hansen et al 2001 and the website),

this claim is incorrect. Readers in doubt of this may go to

USHCN data, included the version that Hansen says is

unavailable. This file was most recently updated on March 1,

2007 and, for the majority of sites, contains adjusted USHCN

data up to Oct 2006. At present, GISS has only updated USHCN

records to March 2006. Thus, not only are the adjusted USHCN

versions available, they are available more recently than

presently incorporated into the GISS temperature

Data from the other major station archive (GHCN) can be

The GHCN raw data set and v2.mean.Z and the adjusted data

set v2.mean_adj.Z are both updated all the time, most

June, the USHCN record only went to March 2006, the period

of the GISS record. However, readers can confirm that both

the GHCN raw and GHCN adjusted versions have been archived

concurrently and that the switch from one version to another

was not required because of version unavailability.

In this context, the form of the present layer of GISS

to do so. Just use it. There’s no need to estimate the

required correction to undo the effect of switching data

sets. Just stick with the data set that they started with.

Far simpler and cleaner than throwing another “correction”

into the mix – a correction which has required overwriting

their entire input data for all 1221 USHCN stations prior to

Hansen goes on to say:

Also our prior analysis had 1934 as the warmest

continues to be the warmest year, both before and after

practically the same, the difference being much smaller

Unfortunately, this statement is again untrue. The data

immediately prior to the changes showed 1998 as the warmest

year (admittedly by a negligible margin of 0.01 deg C), but

still the warmest, contrary to the claim made here. GISS has

overwritten this data file and did not preserve an online

version of the uncorrected data that they had previously

shown. However, by chance, I happened to have had the data

readers that the GISS data

purported to show that 1998 was the “warmest”. Hansen may

have been for 1934 before he was against it. But now that

The U.S. has warmed during the past century, but

variability.Indeed, in the U.S. the warmest decade was

This was illustrated with the following depiction of US

However within only two years, this relationship had

mean temperatures is a few hundredths of a degree.

the ranks changed slightly with 1998 creeping into a slight

The main reason for the changes were the incorporation of

an additional layer of USHCN adjustments by Karl et al

and statistical justification of these USHCN adjustments is

Changes in the relationship of the 1930s to recent values

have not merely been made in the United States. In the

Arctic, there has also been a progressive change in the

relationship of temperatures in the 1930s to recent

temperatures, a point previously discussed at

Arctic, as shown in the excerpted figure showing the 64-90N 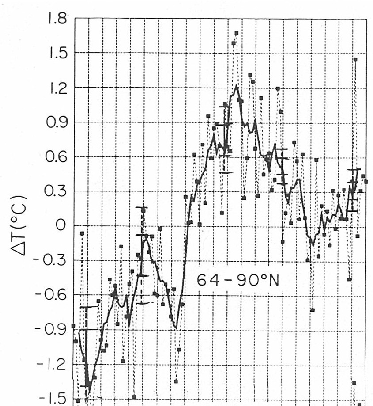 seen in the full Figure 7 of the original article shown

The graphic below compares the most recent version of the

information in Hansen and Lebedeff 1987 (which prints out

estimates have been reduced by approximately 0.4 deg C.

Despite recent warming, 2005 was the first year in which

line – (indeed, 2003 was the first year that exceeded the

“adjusted” 1938 value). While there are undoubtedly “good”

reasons for these adjustments (and I am not here arguing the

point one way or the other), the net effect of the

adjustments has been to consistently lower temperatures in

the 1930s relative to more recent values. Whether these

adjustments prove justified or not, modifications to the

temperature record of this magnitude surely warrant the most

careful scrutiny before turning the “lights out upstairs.”

compares 1938 value from Hansen and Lebedeff 1987 to other

I have a question about the NASA site. On the http://nasadaacs.eos.nasa.gov/articles/2006/2006_seaice.html page it shows a graph for summer melting here http://nasadaacs.eos.nasa.gov/articles/images/2006_seaice_graph.gif But that graph only shows the bottom half of the data. It you go to another site here http://nsidc.org/seaice/characteristics/difference.html the graph for Arctic Ice from the University of Colorado list data for both the melting and the maximum. They appear to show no significant change in their data. If you took the mean of that graph it would be close to zero. Can anyone explain this to me?

Good post and thanks for cross-posting it here.
Steve does a good job disecting Hansens’s letter, but you really have to read it to believe it.
Regarding Hansen’s statement, “My apologies if the quick response that I sent to Andy Revkin and several other journalists, including the suggestion that it was a tempest inside somebody’s teapot dome…” seems to be a pretty clear shot at President Bush as the “Teapot Dome” scandal was on the verge of bringing down President Harding who ultimately died in office in the 1920s. Hansen has publicly ripped the head of NASA and Bush in the past. Doesn’t seem like a guy with any concerns about job security.
If nothing else, this entire episode should make it more difficult for GISS, NCDC, IPCC and the rest to continue with the “trust us” routine. Regardless of which side of the issue you are on, that is good for science.

Fed agencies among serious stragglers in Y2K preparations
Some await the apocalypse; others think the problem will be merely annoying. In any case, the federal government’s own outlook inspires little confidence.
Joel Willemssen of the U.S. General Accounting Office doesn’t sugarcoat his answer. “All the government agencies will not be done on time. There will be some failures,” he says.
Jim Hansen has made Joel Willemsson into a modern day Nostradamus.

Just a quick FYI: I recently posted graphs of temperature level data for all stations in GHCNv2 on my site:
http://www.unur.com/climate/ghcn-v2/
Sinan

Sinan,
That is truly an impressive compilation of GHCN data on a station by station basis. I know it will be usefull in the work being done. Thank you for the hard work to make it available.
Anthony

Sinan, be sure to archive old versions of the data, in case of future retroactive adjustments.

Thanks Sinan.
Do you have a comments section? I have some notions for other kinds of checks that SteveMc prolly does not have time for, but which could yeild a nugget or two

Hello:
Thanks for the comments. My web site is basically read-only at this point.
If you would like to contact me, you can do it using the form at http://www.unur.com/sinan/contact.html
In any case, I am hoping that what I am doing can complement Steve and Anthony’s work in some way.
The graphs that are currently on my site are useful because they show, for each location, the maximal amount of data available. It is interesting to note that, while the U.S. is a small part of the global surface area, many of the longer, continuously updated temperature series come from the U.S.
I plan to go over my scripts and release them this week.
Sinan

Sinan that is awesome. I would have had no idea how spotty the world record is without looking at your graphs.
Another thing your presentation pointed out to me is the contrived nature of using temperature extremes to plot changes in the global temperature.
That was below my radar, and I thank you for pointing it out to me.

Perhaps surfacestations.org should have a link to the graph on Sinan’s site for each station?
I know it would be some extra work, especially retro-adding it to the site pages already online, but if it was included as each site was uploaded it would make things much easier.

The raw data must always be available. Correction factors are just guesses.

Sinan: The text on each station page for USA data says temp is measured in hundreths of a degree C. I think you must mean tenths of a degree in order for the scale to correspond to -40C to 40C

Molon Labe: Thank you for the correction. I will fix the template and regenerate the HTML pages.
There are a couple of other changes I want to make to the presentation and I will post a note here when the new version is up.
The whole shebang consists of 13,000 files and just generating and uploading them takes some time. I prefer generating the information offline and serving static content.
I have to admit. I still don’t fully understand these databases.
Why does the series for Copenhagen, DK end in 1991?
http://www.unur.com/climate/ghcn-v2/612/06186.html
Sinan

How can I find out where NOAA or other “official weather stations” are located in Central Florida? Anyone know?
Thanks.

Karen,
See http://www.surfacestations.org which is my nationwide project to locate and document such stations.
There is a master list link on the front page that has info on station locations. There is also a browsable online database of photos acquired already.